MTN studied the Nigerian market for three years before it took the leap to invest in Africa’s most populous country. 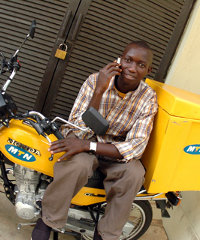 In 2001, when MTN bought one of the three mobile licences on offer, Nigeria was just emerging from decades of military rule and failed attempts at democracy. “There were positives and negatives at the start in Nigeria, but we were persistent and persevered, mainly due to a lot of resolve by senior management, who were committed to a longer-term vision,” says Bing.

MTN Nigeria has since managed to grow the business to over 40 million subscribers, which is around 40% of the total market share. Nigeria is currently also the company’s largest market. MTN operates in numerous countries across Africa and the Middle East.

Bing explains that when MTN first arrived in Nigeria, local perceptions about foreign investment were somewhat negative. “The only real previous examples had been the mining and oil industries, many of which were looking for a quick buck and had one eye on a quick exit.”

He says the company had to convince Nigerians that its services could actually improve their lives and that they could also benefit financially.

According to Bing, some of the greatest hurdles to foreign investment on the continent are outdated tax laws and problematic legal systems. “Many African countries have tax laws that have not changed for 50 years and are very much a reflection of the colonial period. Africa has to make significant changes in its legal system to make investment worthwhile for the investors. The problem is that the effect of legal reform is often not clear for years.”

“India and China made these changes twenty years ago now, but Africa has got to take that leap of faith and make the changes. If they do, it’s highly likely that investment will follow.”

He says that many foreigners have the wrong perception of Africa, but that Africans themselves must also change their own views of the continent.