Microsoft recently moved into a brand-new regional office in Abidjan, Ivory Coast. How we made it in Africa correspondent Richard Miles caught up with Simon Ouattara, Microsoft’s general manager for Francophone west and central Africa, to speak about the region’s IT industry. Below are the slightly edited excerpts. 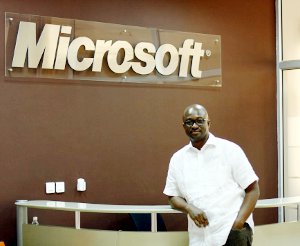 HWMIIA: Does reality correspond to the much talked about new Afro-optimism?

Ouattara: Yes and if you look at particularly the ICT sector, you will see a lot of young people now with the entrepreneurial mindset. You have in Congo for example a gentleman who has launched the first African tablet. In Cameroon we also have a young man who just launched the cardio pad, a Windows-based tablet that is used to treat people with heart disease. So all these are innovations that really show that we now have a vibrant ecosystem and people with very innovative ideas. I think this is very good for the sector and for the economy as well.

HWMIIA: Are Francophone African countries still a little behind their Anglophone neighbours?

Ouattara: That may have been the case, but today with what I am seeing it’s less and less the reality. We have an initiative called Imagine Cup, where we have students who work in groups who try to find ideas for projects, products or solutions, based on Microsoft technology, that can address some challenges. Last year, for example, we had a group in Senegal called ‘Cyan Girls’ who made it to the world finals in the US and who really demonstrated a good ability to solve agricultural problems using technology. These people are from Francophone Africa. So today I don’t see a lot of difference between the two sides of Africa.

HWMIIA: What’s Microsoft’s strategy in the region? Do you have any adaption of products for the local market?

Ouattara: We have global products and some of these products are localised, and in many circumstances the localisation is the language. Specifically for our region here, the first language we have started to put in our local language programme is Wolof. Windows 8 will come out with Wolof as a local language. We have invested a lot in that and we are very proud to have achieved this milestone. Other languages will follow. But the products that we sell are global Microsoft products and the problems that customers face in our market are generally not different. Of course, the environment is different, but if you need a messaging system here or in the US or in Europe it’s the same, and these products are modular enough to be able to adapt to the size of the company. So it’s the same product that will be deployed and configured in a local way.

HWMIIA: Is piracy in the region a massive problem for a company like Microsoft?

Ouattara: The studies we have show that the piracy rate is around 80% on average in the region. Eighty per cent of Microsoft software used on PCs in this region are violated – we estimate the value of this piracy at US$27 million. So this is important. It also has a big impact on local economies because Microsoft uses an indirect sales model by working with our many partners. So for each dollar Microsoft makes, the partner in the ecosystem is making roughly $11. So you can imagine that if we can reduce the piracy rate, the impact for us and even more our partners would be significant.

HWMIIA: Will the arrival of new undersea internet cables this year on the west coast of Africa be a real game changer?

Ouattara: You know one of the biggest innovations of these past two or three years is the phenomenon of cloud computing and the biggest limitation in Africa to these services is the network and the bandwidth. So when we get internet access with the correct bandwidth at an affordable price for the majority of people, you can imagine how this will impact small businesses, people, and big businesses as well. For example, if you take a small firm with 15 to 20 employees, they may not have the resources to invest in a full IT solution including messaging, internet systems, payroll and financial systems. Today all this is available in the cloud. So if you have these new cables coming in, with reasonable pricing, I think it will really be a game changer.

HWMIIA: Where are things heading in the next five to ten years?

Ouattara: It’s interesting because if you take mobile phones for example, Africa is one of the places where the year-on-year increase of mobile phone penetration is one of the fastest growing in the world. If you take the number of smartphones that are sold in this region or in Africa in general, you’re not in the thousands but millions. This will create the opportunity to provide unimaginable services to the vast majority of people here in Africa.

The second thing is the transformation that is coming with cloud services, which today can be considered as excluded for Africa. But in the next couple of years when we have the bandwidth and faster internet, we will be part of this transformation. So I don’t see a different path for Africa than what we are observing in other places in the world. Today we are lagging behind, but in the next couple years as the internet revolution becomes a reality, I think this gap will be closed very quickly.

Richard Miles is How we made it in Africa’s correspondent in Abidjan, Ivory Coast.