Kenyan entrepreneur Mike Macharia was only 25 when he ventured into business, establishing Seven Seas Technologies (SST), one of East Africa’s leading technology solutions companies. He is currently the Group CEO of SST. From a team of just five at inception in 1999, the SST Group today has more than 100 permanent employees in East, West and Southern Africa as well as Portugal. 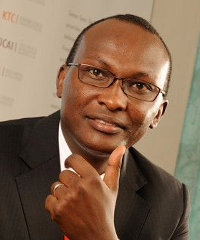 Macharia argues that life is not always smooth sailing, not even for those considered to have made it, but it is the bumps along the way that mould one to perform better in the next instance.

Aged 37, Macharia feels that Africa views its entrepreneurs and success in a skewed manner that needs to be turned around.

“We are all trying to become the next Facebook, which is indeed a story of innovative success, but we need to move away from the ‘copy and paste’ syndrome. What may work brilliantly in one continent and culture may not be directly transferable across the board. In Africa, when learning from successful case studies, one should ask the critical question; ‘Is the solution provided related to the problems that are affecting Africa today?’ We need to link African problems with innovation and create monetary value. Now that is business,” said Macharia in an interview with How we made it in Africa.

He argues that the concept of entrepreneurship in Africa has a lower acceptability profile compared to the Western world.

“In Africa, we are conditioned and socialised [into thinking] that the vision of success is to work for a large company, earn a pay cheque, be able to have a mortgage and go out to social places with our families. The concept of entrepreneurship, therefore, does not fit into this bracket and is viewed as alien,” explains Macharia. “That is how we are indoctrinated from childhood and altering this perspective is a journey that has only just begun.”

Macharia opted out of pursuing his university degree in mathematics and physics. He would later study finance and take up an accounting position in an IT firm as his first job. It is this understanding of cashflows and finance that has been instrumental in his entrepreneurship journey.

According to Macharia, Africa needs policies that encourage entrepreneurs to capitalise on the continent’s opportunities.

“Tax regimes in Africa do not generally support entrepreneurship,” he notes. “The policies around intellectual property are weak and do not protect innovation.”

African capital markets, which he says are just beginning to strengthen, are not yet in a position to enable entrepreneurs to raise the much needed early funds, and limited exit strategies are also a cause for concern amongst private equity (PE) investors.

“PE investors can easily invest in what may seem as worthwhile businesses and then find that exiting becomes a very difficult task. This remains one of the ongoing areas of disquiet among potential investors. Our stock markets are also not mature enough in comparison with the worldwide playing field, especially in the technology sector to value technology assets,” he adds.

Macharia is also worried by the tendency among Africans to trust foreign ideals, businesses and entities first, a phenomenon that has weakened the positioning and growth of many African companies. This influence, he argues, can be attributed to the historical nature of external development.

“We need to begin consuming our own products and believing in our own local successes,” says Macharia.

In the face of all these challenges, passion is what keeps Macharia going. “Passion is what keeps you grounded when all things fall apart. You need to be focused, hands-on and highly engaged in your business. You also need to understand the fundamentals of money, how it works and how you can make it work for you because it is a scarce commodity yet crucial to entrepreneurial success.”

He reckons that another mistake African entrepreneurs make is having tunnel vision – not thinking about the bigger picture and not playing in the global court.

“My vision has expanded on a radically global scale. I don’t sit down and think about Kenya only, as was previously the case. I have re-energised my passion and consider myself an African entrepreneur,” says Macharia.

Africa has plenty of innovative, like-minded entrepreneurs who, he says, need to start looking at the region as a whole and create partnerships to drive the African agenda globally.