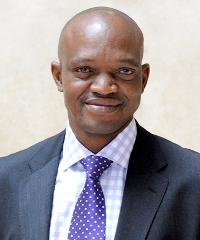 Zweli Manyathi, CE of personal and business banking for Africa at Standard Bank

I was a messenger, you know the guys who deliver the letters, for Absa. It wasn’t Absa in those days; it was Trustbank, many years ago. I was 20 years old.

There was a gentleman by the name of Willie Willers. He was general manager of what was Barclays at the time, later to be called First National Bank. That is the guy who did quite a bit to shape me as a banker and he was just this very demanding person who always challenged me to do lots of good things. He gave me the confidence in some instances that I have what it takes to actually deliver in each of the projects that he wanted me to do. So the confidence he showed in me gave me the courage to do the things I was supposed to do.

I always wonder if we are all executing for the same results that we have all agreed to. So really at the core of that is whether or not we have become absolutely clear about what it is that we need to be doing to achieve our objectives and that we diligently pursue those. Sometimes I think that we need to talk about what it is that must be achieved over and over again before it sets in… I do worry and wonder sometimes whether everybody is in sync at all times, as far as execution is concerned.

I think that it’s just making a decision first of what it is you want to do, and the second thing is just being very disciplined in pursuing the success in what you want to. Mostly you must actually accept that in some of these things you are going to meet challenges and some of those challenges are going to be very big. Just accept that sometimes success comes when you conquer adversity. If you do that on an ongoing basis, just be determined and just keep believing that you can.

I suppose some of the best things about South Africa are the diverse nature of people, the diverse nature of its economy and, in my mind, it has got all the ingredients that it requires for it to be a great economy. Unfortunately, it does not necessarily mean that we are exploiting all of those appropriately, but [South Africa] really is a culturally rich country.

We have got diversity in the kind of entrepreneurs we have because we have very young entrepreneurs who actually master a different way of doing things and are succeeding in their own businesses. And then we have got, on the other hand, veterans… so we are blessed with having had entrepreneurs who have succeeded before us. All we need to do is ensure we learn from those and continue to leverage off the great opportunities that we have as a country.

South Africa continues to be a country that is skewed from a wealth distribution and it continues to be a country that has got too few people that are ‘haves’ and too many that are ‘have nots’. So my fear with that is it makes it easier for polarisation. It makes it easier for groups to form on the basis of lack of access to the economic wealth of the country. It makes it very challenging for us to work together as one country to grow the economy substantially so that everybody is employed, because of the fragmented nature of the issues that we face.

So the biggest issue for me in South Africa is the unequal growth in the economic wellbeing of the people of this country. If we continue this way then I’m afraid I am one of those people who say it is going to be problematic and therefore at some point we have got to find a way that drives inclusive growth. Because right now it is not as inclusive as it should be and that is problematic.

I just recently took on the role of driving the strategy, growth and the business of Standard Bank in personal and business banking in Africa. There are huge challenges. We have a long way to go to achieve the objective that we have set for ourselves. So right now my focus is on how I work for the teams to make sure that we achieve those objectives. I see myself in this role for quite a while so I am not even thinking of anything else but in succeeding in what I have just taken on.

I read. I read political books and I listen to some good music, as well as pretend to be a golfer.

Sit down and make a decision about what it is you believe you are good at and commit to doing that and make sure that you are disciplined and accept that there will be failures that you are going to be facing, like many of us have in the past. But if you fail once it doesn’t mean that you are a failure throughout your life. Many of us will tell you that we have had to face some failures in the past but one thing that is for sure is that you have got to dust yourself off and get on with it and learn from whatever your failures are. Because there is nobody else that is going to do this for us.

Africans have got to do it for themselves and it requires us to stop blaming the past of what happened, and to acknowledge what it is that happened in the past but get on with creating the kind of future that we want and that means hard work, and it means determination, and it means we need to collaborate with one another… we can learn from each other how not to do things instead of wanting to learn everything all by ourselves. That would just take us too long. So Africa is in the hands of the young people of this continent, and they are clever people, and all that is required of them is to just realise that nobody is going to do it for us. We are going to do it ourselves and we must just get on with it.

There are a few things that we need to be doing more of. What is at the very base, the foundation of the success we must have is just this political instability. Africa must stabilise itself politically and the only way it can do that, for me, is for all of us to realise that we can peacefully coexist, and that there is a good African story to emerge if we begin to work together. That is the first one.

So if Africa could get those working, and working well, I believe that we would have created the platform, and we would be beginning to create the necessary conditions, for the serious growth that Africa is capable of.