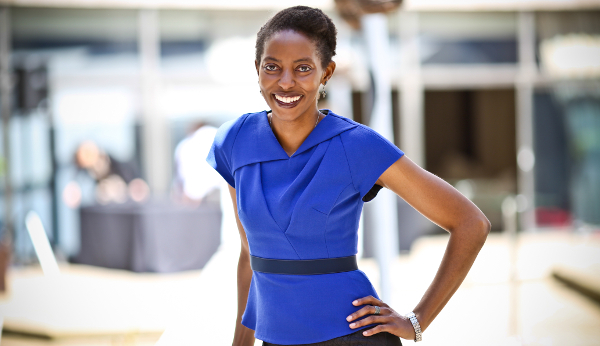 ‘Don’t imagine that just because you hear fantastic stories about people who drop out of school and make a fortune, and do things the easy way, that this is typical. It is far from typical,” says Amy Jadesimi, managing director of LADOL.

I worked in investment banking for Goldman Sachs in London.

2. What parts of your job keep you awake at night?

There are lots of things. The best way to describe it is that we are building an industrial village from scratch, and now we are sort of a third of the way through. So we are building and running at the same time. What keeps me awake at night are personnel issues, operational issues with clients and with jobs we have going on – and then of course thinking about financing and fundraising for the next stage. So quite a few things.

It is probably a combination of my mother and grandfather. My mother worked for some of the time I was growing up and some of the time she didn’t. She is one of those people who manages to be very feminine and very loving, and in some ways a stereotypical mother who was at home a lot and looked after us, but she is also a savvy businesswoman. She is beautiful, an incredibly strong and dignified person, and also a very decent person. I think that decency and kindness and compassion for the world – those are things which you don’t really learn at Goldman Sachs. I am not one of these people that slams bankers – but you don’t learn compassion and kindness there.

So those character traits combined in someone who is very intelligent and is savvy and who has given me a lot of good advice about career choices and business choices – that has had a very powerful impact on me growing up.

And then there is my grandfather. He was assassinated before I was born but I grew up hearing a lot about him. He was someone who had a lot of foresight. He also invested in businesses, built schools, and was focused on building industries in Nigeria. As I was growing up I learnt a lot about his career, like he was a self-made man and also seemed to have compassion and respect. He really believed in Nigeria, but also believed in the power of the private sector to drive change.

So those two people have probably had the most profound effect.

4. What is the best professional advice you’ve ever received?

Stanford is quite a unique business school, not just because it is entrepreneurially focused, but it really celebrates individualism. It is the only kind of institution of higher learning I have been to where you are really encouraged to figure out what your passion is – no matter what it is. The idea is once you figure that out, you just need to put everything into it. But not in a wishy-washy way.

It teaches you structures, how you can turn [your passion] into a business or whatever. It doesn’t have to be for-profit. There are a lot of Stanford business school students who pursue non-profit enterprises as well. One of our classes had to do with interpersonal relations – that’s where you really learn what it’s like to kind of see things from other people’s perspectives. And I think growing up the way I did – very focused on my academics, achievements, exams and things like that – learning how to sort of step back, empathise with people and see things from other people’s perspective, was probably the best thing I ever learnt at school. And it has really helped me, particularly being a managing director. You are dealing with so many types of people and so many different problems on a daily basis. So that class on interpersonal relations has really stayed with me.

5. The top reasons why you have been successful in business?

I think I am a grafter. I work really hard and that has really stood me in good stead. I have never thought of myself as being a smart person or not, I am just happy to kind of put my head down and work. Also, I’m not worried about what other people think – not in an arrogant way I hope, but from a sense that I set myself internal goals and I am focused on achieving them. And I try to make sure they aren’t influenced by the outside world, like the media… So I think hard work and being true to myself has been key. Although when I say it out loud it just sounds very sort of “Hollywood”.

6. Where’s the best place to prepare for leadership? Business school or on the job?

If I had to choose between the two, then I would have to say on the job. And I think business school is not something most people will get to experience. But I would say it’s probably the icing on the cake. One of the reasons I went to business school though is because I thought that, initially being trained as a doctor, I could always get a job in a hospital. But going to business school I felt it was a nice safety net – that I would always be able to get a job somewhere in the world and it gives one that extra security. So business school is kind of like the belt and braces, but on the job is the meat of the matter… So you can’t beat learning on the job – starting from the bottom, working your way up, understanding every aspect of how the company works. You really can’t beat that.

I try to exercise a lot. I like running. I have taken up boxing training, which is for anybody who is trying to get fit quickly. I don’t box, I do the training the boxers do – which involves a little bit of sparring and lifting, but there is a lot of exercise, sit-ups and things like that. So that sort of training regime is a good thing to do if you want to get fit really quickly – and it definitely takes your mind off things and relaxes you.

8. By what time in the morning do you like to be at your desk?

I always ask them about where they see themselves in five years. And I know everybody hates that question, but it is actually really insightful… I don’t really care what the answer is, but what I am trying to get from them is two things. Firstly, I want to know that they actually have a vision for their future, that they have some plans and ambitions. Even though it is a question that everybody expects, you would be surprised by how many people just answer it in a way that shows they haven’t really thought through the next two minutes, let alone the next five years.

Secondly, it is also good to know what people’s ambitions are, if they have them. In the case of LADOL, I always tell them I love entrepreneurs. So the extent of their ambition is to set up their own LADOL or to set up a facility inside LADOL, or to stay and help build it – any of those answers are great and can be accommodated. Because it is part of my belief in teamwork and collaboration that whatever your ambition is, if you are honest about it and you are willing to work hard, helping someone else fulfil their ambition can only be positive. There is no negative. If someone wants to come and do something positive with their lives and build a business, or set up a consultancy or something like that – if they do that and they are successful, it is always a positive for us. So I like that question.

10. What is your message to Africa’s aspiring business leaders and entrepreneurs?

Be very hardworking. There is that book which a lot of people have read – Outliers by Malcolm Gladwell – which kind of says it all. It goes through all these successful people and unlike other kinds of books that talk about successful people, this one actually tells you the truth – which is the one factor correlated with all successful people. Hard work. He even comes up with a number, how I don’t know, but he says most successful people have spent at least 10,000 hours doing the thing they then become successful at. Like the Beatles ended up becoming a huge success after they had spent over 10,000 hours performing in all kinds of clubs in Europe and then travelling around really earning their stripes. Similarly with Bill Gates. He may have dropped out of university – which is the only part anybody remembers – but he didn’t drop out of university and do nothing. He was actually sitting in a basement for two years straight, coding for 18 hours a day.

So hard work is really essential. You have got to be prepared to roll your sleeves up, and don’t imagine that just because you hear fantastic stories about people who drop out of school and make a fortune, and do things the easy way, that this is typical. It is far from typical. If you work hard, even if you don’t get what you are aiming for, you will get something. You will never be empty-handed. And the experience of working hard opens up so many doors because in the process you’re educating yourself, you are learning about yourself, you are learning about other people, you are meeting people, and people can see your work and your passion – and it will lead to something.

The other thing I will say is hold yourself to a high level of integrity. Think about integrity as a way of maximising the return from your hard work for yourself and for society. Integrity is really important. And don’t be confused or deluded by stories that suggest Africans don’t have integrity or that corruption is endemic in Africa. That view is absolutely ridiculous.

So work hard, have high standards of integrity, and have fun as well. Because if you are doing something you love, working hard at it and being honest about it will also be fun.

Dr Amy Jadesimi, is the managing director of the Lagos Deep Offshore Logistics Base (LADOL), a 100-hectare free zone and logistics hub in Nigeria for multinational industrial and offshore enterprises.

Jadesimi graduated as a qualified medical doctor from Oxford University Medical School. She later joined Goldman Sachs International’s investment banking division in London, before attending Stanford Business School, where she earned an MBA. After graduating, she moved to Nigeria and set up a financial consultancy firm before joining the management team of LILE, an oil services company, and then LADOL as managing director.

She was listed among the 20 Youngest Power Women In Africa by Forbes magazine in 2014 and was named a World Economic Forum Young Global Leader in 2013.