Once again Malawi finds itself in a tight spot. A food crisis set off by erratic rains, rising food prices and economic hardships is slowly unfolding. For the first time in several years, the country’s ability to feed its citizens is at risk. Sadly and unexpectedly, Malawi has lost its hard-earned status as an agricultural success story – it used to produce enough maize for its people to eat and still provide a surplus to neighbours. Many are now wondering what went wrong and whether there could be lessons for other African countries. 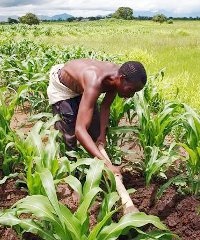 Many people in Malawi are facing severe food shortages.

More than 1.63 million people, or 11% of the population, are facing severe food shortages, according to the World Food Programme, a UN relief agency. Malawi needed US$30 million to the end of 2012 to cover the shortfall. Agriculture is the backbone of its economy: four in five people rely on it for income. Most farmers plant on small plots by hand with little irrigation, and therefore are vulnerable to recurring droughts, notes the UN Food and Agriculture Organisation. Malawi is home to Africa’s third-largest freshwater lake – Lake Malawi – yet less than 3% of the land is irrigated.

Malawi’s current troubles might seem surprising. Yet to those who follow events in the tiny, poor and densely populated landlocked Southern African nation, it is less an abrupt change in fortunes than a series of self-inflicted injuries unfolding in slow motion.

Back in 2004, President Bingu wa Mutharika, who died in office in early 2012, rode into power on a promise to increase farm subsidies as part of his Farm Input Subsidy Programme. Under the plan, the government gave subsidy vouchers to “smallholders to buy a small amount of fertiliser and seed so that they could replenish the soil nutrients, take advantage of improved seed varieties and at least achieve a livable crop from their tiny farms,” says Africa Confidential, a UK-based newsletter. The vouchers were redeemable for seeds and fertiliser at about one-third of the normal cash cost.

The results were instant. In 2005, a year after expanded subsidies kicked in, Malawi harvested a grain surplus of half a million tonnes. In subsequent years it exported grain to Lesotho and Swaziland, as well as 400,000 tonnes of maize to Zimbabwe. Food experts and advocacy groups took turns at international forums extolling Malawi as an example of Africa’s “green revolution.” Exploiting his new-found success, President Mutharika called on other African leaders to embrace his policies. Now the tables have turned, and Malawi is facing severe food shortages.

Ironically, even during the years of plenty, Malawi continued to import large quantities of wheat, maize and other cereals, says FAO, and isolated pockets of hunger remained. In pursuing subsidies, Mutharika defied donor critics who alleged that the programme was riddled with corruption, ran counter to the principles of free markets and was unsustainable. Indeed, by 2009 the government was spending 16% of its budget on subsidies.

Over time President Mutharika became autocratic, amid charges of corruption and cronyism. In 2009 he spent more than $20 million on a long-range presidential jet. Worse, he started promoting his brother Peter, then foreign minister, as his successor, further alienating donors, on whom Malawi depends. As the donors abandoned him, the economy tanked and protesters took to the streets, leading to political instability.

Now that a previously successful experiment with an “African green revolution” is unraveling, what are the lessons for others? With a population of more than a billion and counting, will Africa ever be able to produce enough food for its people? The answer to that question is a qualified yes. But for it to happen, certain conditions must exist.