Wealthy Nigerians are living it up in London, playing polo with royalty, frequenting the capital’s top restaurants and bars, snapping up luxury properties and driving sports cars. 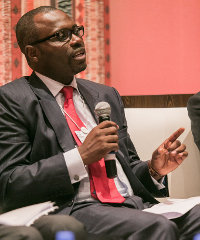 This according to a colourful article, titled The Nigerians have arrived, in the December issue of British lifestyle and fashion glossy magazine Tatler that describes the lavish lives of rich Nigerian businesspeople and their children.

Many of those mentioned in the article travel between Nigeria and the UK. Some even fly in their favourite British food when visiting the West African country.

According to the article, Nigerians are the UK’s sixth-highest foreign spenders, and spend £300m annually at British universities and schools.

While many of the families featured in the article made their money in Nigeria’s oil and energy sectors, some of the younger generation are establishing themselves in industries such as music.

“Though oil and gas is still the usual career path for the ambitious and connected, it’s notable that several of the younger generation are trying to make it in the entertainment business,” notes the magazine.

In the article, CEO of Shoreline Energy Kola Karim tells the story where a woman assumed he was a professional football player after seeing his yellow Ferrari parked in London’s affluent Chelsea neighbourhood. “The automatic assumption was that a prosperous black man could only be a footballer or a rap star.”

A number of recent reports have highlighted Africa’s super wealthy. According to a recent Bain & Company research report, Africa’s market for luxury goods will grow by 11% in 2013 compared to 2012. A recent study by Wealth-X and UBS bank reveals that Africa as 42 dollar-billionaires, seven of whom are from Nigeria.

Nigeria’s Aliko Dangote is generally considered to be Africa’s richest person with an estimated fortune of $17bn. Dangote started a small trading firm in 1977 that grew to become the Dangote Group, one of the most diversified business conglomerates in Africa and a major supplier to Nigeria’s soft drink companies, breweries and confectionaries.

The lifestyles described in Tatler article are however, the preserve of a tiny proportion of Nigerians. It is estimated that at least around 50% of Nigeria’s 170m strong population live in poverty.

A recent survey by Afrobarometer found that African poverty levels have barely improved in the past decade despite an average annual 5% growth in GDP in the same period.