Today’s value chains operate within a context of regular epic crises. Natural disasters, political turmoil, rising oil prices, unemployment and lack of access to business funding, as well as high costs for basic commodities all impact people at a fundamental level. Food insecurity globally has been, and remains a seemingly insurmountable challenge. 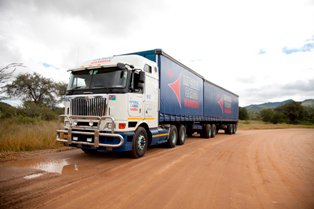 The ‘State of Food Insecurity in the World’ notes, “The rapid increase in the number of hungry over the past years, because of first the food and fuel crisis and now, the economic crisis, reveals the fragility of present food systems.” In Africa, the full potential of logistics is yet to be tapped into to develop the continent’s breadbaskets. Logistics infrastructure and efficiencies are critical to enable win-win patterns of trade in food.

AGRA defines ‘breadbaskets’ as “areas with high agricultural potential by virtue of their relatively good rainfall, soils, infrastructure and markets; large numbers of smallholder farmers; and governments that are committed to agricultural development.”

In 2009, the United Nations Food and Agriculture Organization (FAO) estimated that worldwide, 1.02 billion people were undernourished, of which nearly 240 million people are in sub-Saharan Africa. According to AGRA President Dr. Namanga Ngongi, 70% of Africa’s population depends on agriculture for their livelihoods.

Referring to agriculture as the “mainstay of African economies and its way of life”, Kofi Annan, AGRA Chairman recently noted that “even today, four out of five Africans depend on farming and related activities to provide for their families.” The World Food Programme (WFP) and FAO, however does not attribute the increase in food insecurity to poor harvest crops, “but because high domestic food prices, lower incomes and increasing unemployment have reduced access to food by the poor”.

In February 2011, Annan stated that he was confident that “Africa has the land and the people. We have the potential to feed not just our own citizens but to help create a secure global food system.” The answer lies in investing in our own breadbaskets in ways that benefit smallholder farmers.

Back in 2009, Annan “called for the development of key African breadbaskets that would produce food surpluses of staple African food crops.” The breadbasket strategy seeks to “strengthen linkages between the smallholder and the larger, market-oriented farming operations”, encouraging farmers to grow more food by ensuring that they can sell their surplus at prices that benefit both the customer and themselves.

Infrastructure is the springboard to agricultural growth, however the continent is said to have less infrastructure in place than Asia had in the 1950s. The World Bank estimates that the infrastructural deficit in 24 African countries reduces annual growth rates by up to 2 percentage points and productivity by 40%. As reported in FTW, 13 October 2011, “Transport costs in landlocked African countries account for up to 70% of the value of exports.”

Africa’s road access rate is also reportedly only 34%, with roads accounting for 90% of passenger and freight transport. As a result of such factors, it costs approximately $3,000 to ship a consignment from Mombasa, Kenya to neighbouring Kigali, Rwanda. Whereas transport is 15% of the cost of the fertiliser to Asian farmers, it adds 40% to the cost of fertiliser to the farmer in Africa.

Countries such as India, Tunisia and Morocco have made significant progress in transforming their agricultural systems. This has been achieved through following an integrated approach to investment throughout the value chain. Annan attributes successful agricultural transformation to “all parts of the agricultural system working together.”

In 1999, WFP Executive Director, C. Bertini commented, “We do not have a food supply problem; we have an access problem. So it is appropriate to focus today on the logistics of food security and getting food to people who need it most.” Over ten years later, this still applies.

Logistics plays a critical role in ensuring that the global food production system works – and works effectively for the people it serves. Historically, for example the WFP has invested in “linking remote areas to markets, and repairing and even building port facilities and rail lines” with successful food aid results.

Supportive government policies and infrastructure development partnerships are imperative to “connect farmers with markets, reduce reliance on food imports and launch a new trajectory of sustainable growth.” In emerging markets, Logistics Service Providers (LSPs) have much to contribute through Public-Private Partnerships (PPPs).

Consider how companies such as Wal-Mart and McDonald’s are investing in supplier development efforts in the developing world. In India, Wal-Mart is “improving the operations of thousands of upstream suppliers.” McDonald’s has “spent six years developing local farmers’ agricultural practices and building a reliable cold chain before opening its first store. Not only did this effort create wealth and transfer technology, but it also improved farm yields by 60% and cut chemical and water use by two-thirds. ”

Furthermore, in October 2010, Wal-Mart announced its intent to improve the way in which “food is grown and transported across the globe. The company plans to triple the amount of food it sells from small- and medium-size farms in emerging markets, such as India and Brazil to $1 billion within five years. The programme aims to reduce the distance food must travel, lowering energy use and costs.”

Dr. John C. Langley, Clinical Professor of Supply Chain Management and Director of Development for the Center for Supply Chain Research at The Pennsylvania State University says, “When times get tough, many companies head for the trenches and turn inwards in terms of their priorities. This is exactly the wrong thing to do, particularly as it relates to the need for inter-organisational cooperation in the supply chain.”

Nowhere is this collaborative approach more critical than in addressing global food insecurity. Transformation of Africa’s agricultural sector through development of its breadbaskets is imperative to sustaining people, worldwide. Critically, harnessing logistics expertise and infrastructure must not be discounted.

Abrie de Swardt is the Marketing Director at IMPERIAL Logistics.