While Johannesburg is the most important African city for ultra-high net worth individuals (UHNWIs), Kenya’s capital Nairobi is gaining prominence. 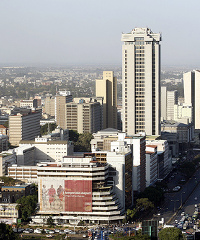 Kenya’s capital Nairobi has been identified as one of the continent’s emerging wealth hubs.

This is according to global real estate consultancy Knight Frank’s 2014 Wealth Report that identifies Nairobi as one of the continent’s emerging hubs.

“This is the most important African business centre between the Mediterranean and Johannesburg,” says Anthony Havelock, Knight Frank’s head of agency in the city.

Havelock highlights the fact that many multinational companies – including Google, JPMorgan Chase and Colgate-Palmolive – have established offices in the city, noting there is “too much going on in Africa” for these companies to run their entire operations out of South Africa, arguably the continent’s most advanced economy.

Nairobi is the only non-Asian city to feature in the top 25 cities ranked by growth in UHNWHs (those with US$30m or more in net assets excluding their principle residences). Over the coming decade, the number of UHNWIs in Nairobi is expected to rise from the current 65 to 116, a 78% increase. Nairobi’s prime residential real estate prices are also the fastest growing from all the African cities included in Knight Frank’s survey.

Despite Nairobi’s rise, it is currently only the fifth most important city for the continent’s wealthy, behind Johannesburg (first), Cape Town (second), Cairo (third) and Lagos (fourth).

The survey assesses the locations that matter to the world’s wealthy based on four key themes: economic activity; political power; quality of life; and knowledge and influence. Globally, London is the world’s top city, followed by New York.

Knight Frank’s report says there has been a significant reassessment in how the outside world sees Africa. “As economic growth continues to gather pace, new business hubs are emerging across the continent, creating opportunities for real estate investors.”

The report quotes prominent Zambian businessman Mark O’Donnell who says the southern African country is presenting strong opportunities in the property industry. “All the supermarkets are looking for space and people are building bigger factories to cope with the extra demand for products.” He says yields of around 10% are available on retail and commercial space.

According to O’Donnell, expectations among Zambians are also higher. “People want to shop in better retail spaces, work in better offices and experience the same standards that you get in developed countries.”