Headquartered in Frankfurt, Pearl Gold AG is a German holding company which invests in high-potential gold mine projects in West Africa. How we made it in Africa asked Robert Francis Goninon, chairman of supervisory board of Pearl Gold, about the company’s investment in a gold mining project in Mali. 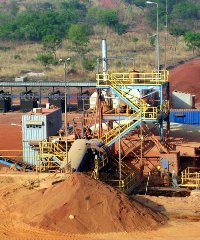 Wassoul’Or put in place a pilot plant with a capacity of 1,000 tons/day which was successfully operated for a period of 12 months. The effective production plant of 11,000 tons/day is expected to come on stream during October.

The first operation in which Pearl Gold invested is Wassoul’Or S.A., which operates the Kodieran gold mine in Mali. This open pit mine is situated 300 km southeast of Bamako and holds a projected gold deposit of at least 1.75 million ounces of recoverable gold. Wassoul’Or holds 30 years mining rights over the 100 square kilometres sized area that encompasses considerable additional gold resources. The operation, which is about to commence, is only one of at least five mineralised sites within Wassoul’Or’s concession. The gold production will start during October this year.

Apart from the 25% stake in Wassoul’Or, Pearl Gold is continuously looking for further investment opportunities in West African commodities. Other opportunities have already been presented to the company’s technical management, and it is intended to follow these up after the current rainy season allows appropriate access.

What is the potential of Mali’s gold mining industry?

Within the last years, Mali has rapidly become a major producer of gold, with several new mines being commissioned or in final feasibility stages. Since 2003, Mali ranks as the third largest African gold producer after South Africa and Ghana with 54.5 tons of produced gold. Although its production decreased to 40.7 tons in 2010, the country still maintains its position. Gold production is expected to rise again to 45 tons by the end of 2011.

International gold mining companies have been highly interested in Mali for more than 20 years. Besides the favourable geological conditions, international investors appreciate the rather stable political conditions and the positive legal framework in Mali, especially compared to other gold producing countries in West Africa like Guinea, Ivory Coast, Mauritania and Ghana. For example, the Malian government permits foreign companies to explore and operate gold mines. Moreover the state of Mali is also supportive of the gold mining industry with a favourable tax policy. After a tax free period of five years after the start of production, the corporation tax is much lower than in other West African countries.

The existence of many still unexplored reserves and the steady growth of the industrial gold mining sector in the last years are other attractive aspects for international mining companies.

Why did you decide to specifically invest in Mali, and not in one of the other West African gold producing countries?

Our first investment decision was based on the trusted experience in the Malian mining sector and the good relationship with nationals as well as cultural and social knowledge of the country of Aliou Boubacar Diallo, the chairman and founder of Wassoul’Or Gold.

Wassoul’Or is a Malian company that actually operates in Mali, thereby supporting local development and the interests of the Malian population.

Mali has a very long gold tradition which goes back to the 14th century. In mature gold mining countries, the gold reserves are becoming scarcer and therefore the mining companies have to dig deeper, which is related with higher costs. Due to the favourable topographic and geological conditions in Mali, where some deposits can be exploited as open pit mines without deep drilling and blasting. Thus, the present-day costs for the gold production tend to be exceptionally low.

With the democratic transformation process, the Malian government has made a great effort to implement various policy reforms to support the development of foreign and domestic investment in the country within the last years. Today, the Malian business environment is characterised by increasing market liberalisation, openness to foreign trade and investments, and GDP growth rates superior to the overall Sub-Saharan regional average. According to the World Bank’s annual publication Doing Business, in recent years, Mali has maintained a constant improvement in its business environment, making the country a preferred destination for investment.

Despite the many improvements, Mali still counts among the poorest countries in the world and is heavily dependent on foreign aid. Mali has a rich variety of mineral commodities. Besides gold, there are iron ore, bauxite, manganese, uranium, phosphate and marble deposits, but many are not being tapped due to high transport costs. Additionally, oil reserves have been discovered in the north of the country. The most important goods for the Malian economy are gold and cotton. Due to the importance of Mali’s natural resources, the economic development strongly depends on the world market price for commodities. The Malian government is aiming at an economical reorganisation in order not to depend too strongly on world market prices and has in the course of its reforms privatised many state-owned enterprises.

A big challenge to support the economical conditions in Mali is the development of the transport infrastructure in order to encourage foreign trade and especially support the exploitation of the diverse commodities, many of which are of relatively low unit value, and are therefore disproportionately affected by transportation costs.

Apart from the increasing demand for gold, the growing cost of gold production is another factor underwriting the gold price at these historically high levels. Only with a fairly rated price, as we have it now over $1,700 per ounce, smaller mining companies can grow profitably and raise their gold production, in order to satisfy the growing demand. At Pearl Gold, we target gold mining ventures in production or close to it, whose cost structure allows for a margin even without a steadily rising gold price.