It is widely expected that Nigeria will overtake South Africa as the continent’s biggest economy. According to some estimates this could happen by as early as 2018. 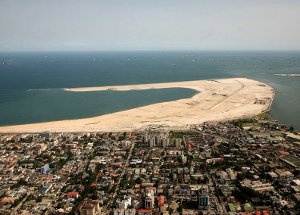 An aerial picture, taken in April this year, shows the land already reclaimed for the Eko Atlantic city.

One of the projects that best illustrates Nigeria’s ambitions is the Eko Atlantic development in the country’s commercial hub Lagos – a new business and residential area to be built on 9 km2 of land reclaimed from the Atlantic Ocean. With an estimated 18 million residents, Lagos is one of the world’s fastest growing cities. The city’s infrastructure has, however, not kept up with its population growth.

“Lagos has a large concentration of multinational companies and is home to almost half of Nigeria’s skilled workers. It is one of Africa’s five biggest consumer markets and boasts a higher standard of living than anywhere else in Nigeria. Nevertheless, rapid urbanisation and population growth have introduced significant challenges for its water, waste management and sanitation infrastructure, and have put pressure on the energy supply and traffic management,” notes the Siemens African Green City Index report, published at the end of last year.

According to the developers, Eko Atlantic will be home to 250,000 people and a workplace for another 150,000. The new city is expected to have waterfront areas, tree-lined streets, efficient transport systems and mixed-use plots that combine residential areas with leisure facilities, offices and shops. The development will also have its own power generation plant, sewage treatment facilities and fresh water supply.

Eko Atlantic is being developed entirely by the private sector. The project is overseen by South Energyx Nigeria, a subsidiary of the Chagoury Group, founded by Gilbert Ramez Chagoury, a son of Lebanese immigrants who raised all their children in Nigeria. The Chagoury Group has numerous business interests in Nigeria, including hotels, construction, and food processing. Dredging International, a Belgium-based firm, is responsible for the reclamation of land on which Eko Atlantic is being built. Numerous other local and international banks, consultants and contractors are also involved in the project.

“In West African terms, this is undoubtedly the largest project of its nature ever executed. We are replacing what the sea has taken away over the past hundred years or so,” said David Frame, managing director of South Energyx Nigeria, in an interview with CNBC Africa.

What makes Eko Atlantic different from many other ambitious projects that have been announced in Nigeria is that it is not merely a plan on a piece of paper, it is actually happening. Significant areas of land have already been reclaimed.

The Eko Atlantic city is a prime example of how the Nigerian government is utilising the private sector to improve the country’s infrastructure.

“In common with most other developing countries, Nigeria has in the past depended on … government funding to provide infrastructure services. The consequence of that is that the demand for infrastructure has always exceeded significantly the capacity of the government to supply [infrastructure]. Every government is affected by the financial crunch and the Nigerian government is not an exception,” says Mansur Ahmed, director general of the Infrastructure Concession Regulatory Commission (ICRC), the body responsible for managing the government’s public-private partnership (PPP) projects.

“Nigeria has planned, over the next 10 years or so, to significantly upscale its economy to a middle-income level economy. And that has significantly increased the amount of investment we are obliged to make, especially in infrastructure – in power, in transport infrastructure, and in water sanitation and so on. Obviously like other countries we acknowledge that the PPP process is probably one of the best ways to create the condition for increasing investment from the private sector in our infrastructure. And that is why we adopted this approach,” Ahmed explains.

Jay Ireland, president and CEO for Africa at General Electric, believes it is critical for Nigeria to improve its infrastructure in order to take the economy to the next level. “Nigeria is a microcosm for most [African] markets in that the aspect of infrastructure has got to be addressed or the economic growth will start to diminish. You almost choke on yourself. You need to have the ability to get goods to and from the port – that is good road and rail infrastructure,” Ireland told How we made it in Africa in an interview.

One of the areas where the Nigerian government is currently placing significant emphasis on private sector involvement is electricity generation and distribution. Nigeria’s poor power supply is a major burden to the economy. Current generation is less than 6,000 megawatts (MW), whereas South Africa, the country Nigeria soon wants to overtake as the continent’s largest economy, has a capacity of over 36,000 MW. More efficient power generation will have a dramatic impact on all sectors of the Nigerian economy.

“Nigeria remains woefully underpowered in contrast to other sub-Saharan African countries, as any back-to-back visit to Ghana and Nigeria will demonstrate. The lack of officially generated power means that Nigerian businesses rely on expensive electricity from imported small generators, reducing the efficiency of all sectors of the economy,” says Charles Robertson, global chief economist at Renaissance Capital.

“Better electricity supply could free up Nigeria to grow at 10% to 11% annually instead of the 7% to 8% seen in the past decade,” Robertson adds.

The process of overhauling Nigeria’s power sector has, however, started. The government is in the process of privatising the Power Holding Company of Nigeria (PHCN).

Canada’s Manitoba Hydro International has recently been awarded a contract to manage the Transmission Company of Nigeria for three years during which the firm is expected to ensure seamless stabilisation of the national grid and reduce electricity losses during transmission.

To attract investment into the power sector, the government has also started raising electricity tariffs, which were considered too low for the private sector to make a profit.

According to the ICRC’s Mansur Ahmed, “one of the major reform initiatives in Nigeria is in the power sector where the government-owned enterprises … are all being privatised. Part of that programme is to concession out some of the hydro-electricity plants because you don’t want to privatise important hydro plants for obvious reasons. So we are indeed currently in the process of concessioning out two hydro plants … and the procurement process is right now going on.”

In April this year Germany’s Siemens signed an agreement with the Nigerian Federal Ministry of Power under which Siemens will, on a case-by-case basis, consider to support the financing of power plant projects in the country. At the same time, Siemens announced plans to build up a new service workshop for heavy duty gas turbines in the country and will support Nigeria with a study on the integration of renewables in the country’s energy mix. Furthermore, the Nigerian company Scanpower and Siemens signed a technical partnership agreement for the construction of a 1,600 MW gas turbine power station at Lekki in Lagos State.

“A reliable and affordable supply of electricity is the decisive factor in further developing Nigeria’s economy and society”, said Michael Suess, CEO of Siemens’s energy division, in a statement

“The agreements shall be mutually beneficial to the economy of Nigeria via significant advancements in the power sector as well as for the business of Siemens in one of the most important markets in Africa. Lagos, as one of the fastest growing mega cities in the world, is seeking a significant improvement in its power supply. The decision of Scanpower and its joint venture partners to build, together with Siemens as technical partner, a modern and environmentally-friendly gas turbine power station, is an essential contribution to increase the power generation capacity and the security of power supply under the framework of the privatisation of the energy sector in Nigeria,” Suess added.

In addition to the power sector, the Nigerian government is also looking to attract the private sector to its oil industry, especially investment in new refineries. Although Nigeria is one of the continent’s largest crude oil producers, it still imports the majority of its refined petroleum. This was one of the reasons why at the start of the year the government scrapped a fuel subsidy, which led to a doubling of the pump price of petrol, from 65 naira per litre to around 140 naira. However, due to widespread protests, the government was forced to settle for a price reduction to 97 naira.

It is believed that higher petrol prices will stimulate investment in petroleum refineries. “By capping the price on 65 naira, you have made it impossible for private investors to come in and set up refineries. Nobody can produce and refine petroleum products and sell at 65 naira per litre,” Central Bank of Nigeria governor Lamido Sanusi told BBC Africa.

Early in July it was reported that US-based Vulcan Petroleum has signed an agreement to build six oil refineries in Nigeria.

In order to attract the private sector, the government needs to ensure that investors feel secure about their investments.

“We do require an enabling environment. Transparency in terms of terms and conditions. Something that is liberalised that enables us to invest the capital, and be certain there are not changes in government policies that will affect those investments,” said Wale Tinubu, chief executive of Nigerian energy firm Oando, during the recent World Economic Forum on Africa.

“Having a good framework is important but it is also important to have a very clear government policy in supporting PPP investment. Including, where necessary, government support either in terms of upfront funding or in terms of a provision of guarantees where appropriate. But the key issue really is to make sure our projects are bankable, commercially competitive and, to that extent, the role of the ICRC first and foremost is to make sure that these projects are well developed and feasible and commercially viable,” says Mansur Ahmed.

Many would consider investing in long-term infrastructure projects in Nigeria a risky investment. However, for those that can manage the risks, the rewards could be significant.

Johan Meyer, senior vice president of equity analysis for sub-Saharan Africa at Franklin Templeton, recently summarised the potential in Nigeria as follows: “This is a country that has been growing over the past 10 years at about 7% or 8% per year on average, in terms of GDP, and it’s one of the top 10 fastest growing economies in the world. This is a country that generates very little electricity on its own, so most of the electricity is provided by diesel generators. You can imagine the burden that this places on consumers, on companies and on industries in this market, and what potential, what opportunity this holds if this infrastructure constraint is lifted, how this can improve the functioning of this economy. It’s amazing the economy has managed to grow so fast with this type of issue.”