South African online kitchenware store Yuppiechef, founded in 2006 by Andrew Smith and Shane Dryden, is considered one of the country’s top e-commerce companies. 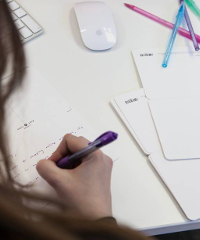 Since their first customer, the Yuppiechef team has been sending personalised, handwritten thank you notes to every customer who places an order.

In fact, for the fifth year running, it won Best e-Commerce Store at the South African e-Commerce Awards in 2014. And a large part of its success has been in achieving customer loyalty.

Speaking at the e-Commerce Africa Confex, director Paul Galatis said the reason they have won enduring loyalty is based on the idea that “generosity creates trust”.

He highlighted some of the strategies adopted to master the art of customer service in the online space.

The most successful e-commerce sites with the most loyal customers are ones that show customers they are dealing with “real people”, according to Galatis. But this can be tricky when interaction is online.

One strategy employed by Yuppiechef’s team is seen in how they respond to queries or comments electronically. For example, Galatis said a customer will never receive a scripted or generic answer. “Our people don’t have scripts in our offices. You don’t have to speak in a certain way, or follow a certain code.”

Responses employing everyday language, even humour, are one way the team shows their customers they are dealing with real people on the other side of their digital communication.

“Sacrifice is a crucial element of generosity,” continued Galatis.

One ‘sacrifice’ made by the Yuppiechef team for their customers is giving up a lot of time to handwrite personalised cards for every customer who places an order on their website.

It began when the founders got their first customers in 2006 during the company’s difficult initial year and wanted to express gratitude. And Galatis said it wasn’t long before customers started writing back, with positive feedback on their personalised thank you card.

Years later, these handwritten ‘thank you’ notes are ingrained in the company’s operations.

Today, every employee who joins Yuppiechef, whether as financial director or a box-packer, goes through an onboarding process where they spend time writing cards and understanding why the company does it. Galatis added while most of the cards are written by the customer service team, the majority of employees still spend some time each day writing cards.

He believes customers appreciate the sacrifice and generosity in a world where communication is becoming less personal.

“For example, today with happy birthday messages on Facebook where a calendar comes up in front of you and tells you it is so-and-so’s birthday, and you simply [type] ‘happy birthday’ – there is very little sacrifice made in giving that, and therefore it becomes a less generous act.”

When the Yuppiechef team was looking into spending R35,000 (about $3,050) on a full page advert in a South African food and lifestyle magazine, there was a debate on whether it was the best way to spend the money. Galatis said the team made the decision to give the money to the customer service team for a monthly “customer delight budget” to spend around R350 ($30.50) on roughly 100 customers “just doing things to delight them”.

“Whether that is on an expedited delivery, replacing someone’s mixer that happens to be three months out of guarantee, or sending someone something special on their birthday, those experiences – we are certain – have a far greater [impact] than the advert would have.”

He added with an advert in 55,000 odd copies of the magazine, he is not even sure that 100 people would even remember seeing it. On the other hand, he believes Yuppieschef’s “customer delight” experience is one way to ensure a lasting positive impression and create customer loyalty.

Breathing room to be creative

Galatis advice to other e-commerce businesses is to give themselves enough breathing room to be creative.

“Every little touch, no matter how small, is appreciated by customers. Make decisions for the long run – short term wins seldom result in long-term gains. And give yourself enough time and your [customers] enough reasons to trust you and your generosity,” he concluded.