African countries have spent decades trying to jump-start agricultural production. In the search for new approaches, many experts are looking for answers in China’s impressive agricultural achievements, which raised hundreds of millions of peasants from rural poverty in the past 30 years. China’s agricultural investments and development projects in Africa are growing. How relevant is the country’s model to the continent? 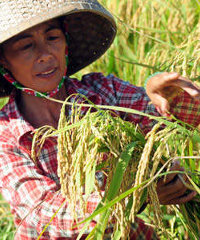 Chinese agriculture has managed to raise hundreds of millions of peasants from rural poverty in the past 30 years.

China, of course, is very different from Africa: it is a single country with homogeneous demographics; a powerful and stable central government; well-developed public-sector institutions, infrastructure, and capabilities at every level; and a long tradition of rice and wheat cultivation. Africa comprises 53 countries with different tribes, ethnic groups, and languages. Many of these countries have unstable leadership, non-existent or weak institutions and infrastructure, little consensus on policy and planning, a postcolonial legacy, harsh climate and health conditions, and agricultural traditions that are not naturally suited for a green revolution. Yet Africa has some important competitive advantages over China — for instance, more arable land and water, as well as a smaller, but fast-growing, population.

Significant agricultural reform must be rooted in priorities promulgated and carried out by political leaders. China’s commitment in the 1980s to increase food production and rural income rapidly was a central pillar of the broader economic-development agenda of “opening up.” In fact, agricultural reform in China was not really an independent development goal but rather a key strategy for broader economic reform. The objective was to create the food security, rural stability, surplus income, and labour supply to drive broader industrial development. In Africa, agricultural policy is too often subordinate to the demands of more politically influential urban interests and incidental to other development policies.

Moreover, attempts to solve agricultural challenges through surgical approaches, such as a focus on accelerating one input or other (say, fertiliser, seed, or irrigation), have failed across Africa as input was turned into a commodity politicians traded and abused as political currency. Strong, comprehensive, and integrated development and investment policies, with agricultural reform as a centrepiece, must therefore serve as a starting point in Africa.

People and programmes matter, but institutions endure and thus enable true transformation. China has set out to create institutional capacity at every level and across many aspects of the agricultural value chain. These include research & development (R&D) institutes; the world’s largest and most comprehensive agricultural-extension system; credit and financing capabilities at the national, provincial, and local levels; and systems for managing seed, irrigation, production, market integration, and export support. While China’s strong government bureaucracy may be difficult to replicate, putting in place the necessary institutions and ensuring support for them will be critical.

China undertook its agricultural transformation on a massive scale, but its genius lies in small, practical approaches. The drivers of Chinese reform, focused on smallholders, manifested themselves in programmes at the micro-level: extension programmes in every village; agricultural engineering that emphasised small tools, machines, and systems; and incentives that engendered self-financing, iterative improvements, and incremental learning. By contrast, African leaders, as well as Western donors and investors, sometimes try to tackle problems with large-scale models and expansive programmes that are inappropriate for smallholders.

It is also easy to overlook the role of technology in China’s rural-development story. China created or expanded scores of R&D institutes and universities focusing on agricultural innovations. New models for seed, fertilisers, and hydraulics were implemented; agronomics flourished as an academic pursuit with practical applications; a million-person extension service created direct links to farmers to ensure appropriate training and uptake; and private-sector investments were supported to ensure further innovation.

The African experience to date has often underemphasised the role of technologies and extension services. But these will be critical to address the gaps, in productivity and market access, that continue to stifle agricultural development. Except for large infrastructure projects, there has so far been only limited success in transferring Chinese agricultural engineering and technologies to Africa. Yet this kind of uptake will probably flourish in the coming decade as better distribution channels emerge, more sophisticated models for adapting technologies to local conditions prevail, and Chinese private-sector investments in Africa are strongly encouraged and supported by huge multibillion-dollar commitments from the Chinese government.

No doubt there are fundamental limits to the application of lessons and opportunities from China to African agriculture, particularly given the vastly different political and economic environments and cultures of accountability and entrepreneurship. Yet it is no foolish exercise for the continent to see China as a source of important clues. For one thing, Africans should consider the negative consequences of China’s aggressive agricultural development: environmental degradation, labour exploitation, and social inequities. Nonetheless, China will continue to be a vital player in all economic-development activities across Africa, through its vast aid, investments, and strategic programs. Many of China’s specific approaches to increasing agricultural productivity and food security, if appropriately adapted to the realities and societies of Africa, may help more of the world’s poorest people to improve their daily lives greatly.

Steve Davis is director of social innovation at McKinsey; Jonathan Woetzel is a director in McKinsey’s Shanghai office. Article republished with permission from McKinsey & Company.