Kenya is an inch closer to striking natural gas, the Minister for Energy Kiraitu Murungi has said.

Although the prospects of striking oil in the near future are far from realisation, Murungi said tests to be undertaken starting next month will gauge whether the East African nation has adequate gas deposits for mass production. 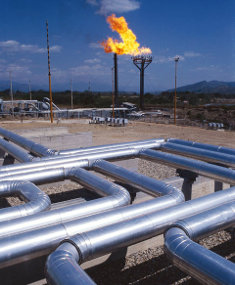 Kenya is hoping to find gas in commercial quantities.

“So far we have not made any commercial discoveries of either oil or gas but we have high hopes and expectations,” he said.

He said exploration by the Chinese National Offshore Oil Corporation (CNOOC) has found gas in four zones of the Boghal well after drilling 5,085 metres.

CNOOC and its partners – African Oil, Lion Energy and the Chinese Petroleum Corporation (CPC) – are currently carrying out drill stem tests to find out whether the gas identified in the four zones is available in commercial quantities.

An upbeat Murungi said Kenya’s hopes of striking gas have been raised by the recent discovery of the commodity in Mozambique since the two countries share identical geological sites.

In 2006 an Australian firm, Woodside, halted drilling in the Lamu area after prospects of striking oil dwindled. Their exit, however, led to the entry of CNOOC which began its operations in October 2009.