Property tycoon Pete Muraya has made many mistakes in business before finding success in property development. 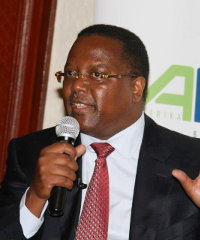 The CEO of Suraya Property Group, one of the most successful real estate businesses in Kenya, has endured one failed business after another, but kept trying because he believed entrepreneurship was what he was cut out for.

The trained architect recounted how in the mid-1990s he decided to organise a concert in Nairobi. He flew in a US musician with the hopes of making significant profits from the show.

“Do you know it wiped me out? I lost everything I had in just one show. I spent US$235,000 and after the show I had made $35,000 in sales. The place was full but there was no money. Guys stole the tickets… no one was watching the gate,” he recounted.

Before organising the show, Muraya and his wife had several cars, including a Range Rover and a BMW. They also owned three properties.

“From that day my best friends were auctioneers… It took me six years to recover fully,” he said, adding that he eventually managed to salvage just one car and one property.

The only business Muraya managed to sustain for a long period was an architecture consultancy he started in 1987. Although business was good, it had its own downsides.

“The problem with consultancy is that it is very personal. The client must like you, not necessarily your work. The personal relationship is very critical. You spend a lot of time chasing people and trying to befriend people so that they can give you work,” he noted.

After Kenya’s 1997 presidential elections, the government decided to freeze all projects being undertaken by state-owned corporations, which were Muraya’s primary clients.

“We thought it was temporary but it became five years of no work. A lot of firms closed down. I had an office of 12 employees and ended up firing everyone expect the receptionist and a technician. It was a very difficult time,” he said.

After reading Robert Kiyosaki’s Rich Dad Poor Dad, Muraya began aggressively working towards getting into the property development business. The only problem was that he had no money, no assets and no banks were willing to lend to him.

He then partnered with a friend who had the capital to put up their first project of 16 apartments. Muraya went on to pioneer partnerships between land owners and developers, and he cites innovation as one of the reasons why his property development business has been successful.

“Yes, we are making money. Yes, we are big. But our drive comes from the desire to impact as many people as possible. We have introduced new concepts and pioneered innovative products in the market that have changed the industry,” he said.

Suraya Property Group has been involved in a number of large projects, and the company has recently also entered the low cost residential market.

Muraya said his goal is to have customers come to his office and have a choice between a $12,000 apartment or a $705,000 penthouse, and anything in between.

Some of the challenges the property group faces is the cost of land and archaic laws.

“It is very difficult to find land. It is very expensive in this country. Land is appreciating at rate that is illogical,” he said.

After losing so much money and failing again and again, why did Muraya decide to give it another shot?

“I always believed that I could make it happen. But I didn’t understand that one needs a very clear direction of where you want to be. I was always getting into businesses, not because I knew what they were, but because people told me there was money in it,” he explained.

He also admitted that his wife, who is the managing director of Suraya, has been very supportive.

His failed attempts in business have taught him never to lose faith. “The day you stop believing that something good is going to happen, you are basically dead. My wife and I always had a positive vibe about things.”

Muraya said he hopes other entrepreneurs do not make the mistake he made – investing in businesses they know nothing about. Real estate has attracted a lot of investors in recent days due to its high returns, but Muraya urges entrepreneurs to exercise caution.

“Real estate is good business, there is good money but one needs to be careful. If you want to go into real estate, don’t do it because you heard Muraya is making money, [otherwise] you are going to burn like crazy. Spend time researching it. By the time you get into it, you should have a good understanding about what it involves.”

He advises aspiring property investors to read widely about the industry, speak to experts in the field and seek advice from successful property developers.