Craig Ross grew up on the Cape Flats in Cape Town, in an area notorious for crime and gangsterism. For more than eight years of his life he was part of the American Gang where he dealt drugs to members of his community. However, in 2007 he went to a rehabilitation clinic where, as part of his recovery programme, he did a social media course. Today, Ross has turned his life around and can be described as an international tech and social entrepreneur. 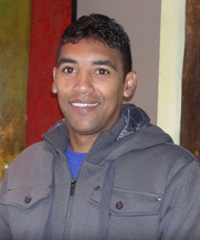 Ross is currently the innovations manager of RLabs, a community driven innovation he has been a part of since its inception in 2007/2008. RLabs was started in the Cape Flats and offers skills training for community development, social and disruptive innovation, mobile and internet solutions, and social enterprise incubation, as well as impact investing and social franchising. The organisation has expanded rapidly and now has operations in nine countries in Africa, with activity in the UK, Europe, Asia and South America too.

Through RLabs, Ross has grown two global tech companies, has another venture underway and, in 2011, was named among Mail & Guardian’s Top 200 Young South Africans.

During his presentation at AfricaCom in Cape Town yesterday, he told his audience that dealing drugs was the start of his entrepreneurial journey, although he didn’t know it at the time. It was then that he first learnt about demand and supply.

“There was a huge market… I saw that I broke up families but still I was part of this evil movement,” he said.

Ross was one of the first methamphetamine dealers in his community and during that time he learnt a number of business lessons, including innovative marketing tactics. He gave samples of his product to others to sell and market for him to gain a monopoly on drug supply in the community. He told How we made it in Africa that, with the police watching him, he learnt how to be innovative to reduce risk of arrest. He also learnt the importance of adding value to products and how this affects profits. For example, he added other chemicals to the crack cocaine he sold.

“So the quality is better than the rest… we were not making more money, but we got more customers,” he explained.

All of this was during a time of hopelessness for Ross and he in no way suggests that drug dealing is a good way to start out as an entrepreneur. He admits to going home and crying every day but could not see a way of getting out of the lifestyle. One day he told this to his friends and soon learnt that they felt just as miserable and trapped as he did. This was how he realised this was a problem many others faced.

“So I came out of substance abuse and I actually changed my life around… I didn’t want to live that lifestyle anymore,” he said

Ross and a couple of friends were some of the lucky few to escape the cycle of crime and drugs in his community. He said this made him an expert at something on which others were looking for advice.

“We understood that there are a lot more people in the world who are also trapped into what we were trapped into. So we developed a programme for people [in a world] where the doors were shut… who wanted to come out of this drug abuse.”

It started with an instant messaging platform to provide counselling for others in the community. They asked a local school for 10 of their “naughtiest” kids.

“They wanted to give us half the school and we said we just want 10… So it was now seven counsellors chatting to 10 people and the following week there was 50 people chatting to us. And then the SABC News Morning Live got hold of us and we did a live demo on national television and the next day we had more than 4,000 people using our service.”

Ross said they could not help everyone and so decided to create a platform that could distribute conversations on social media such as Mxit and Google Talk to other people with expertise to provide assistance. It soon expanded to include other services, from rape and HIV counselling to giving advice on how to change a tyre.

This was how JamiiX was born. It is a service now used by the Yellow Pages in South Africa, and in 2011 the Southeast Asia regional office of the World Health Organisation (WHO) teamed up with Mxit and JamiiX to provide emergency information to people in the region in the case of natural disasters.

However, Ross saw other problems he wanted to solve in his community, and like JamiiX, his next venture to tackle unemployment also had a global impact.

Ross is the founder of Digital Factory, a startup within RLabs that develops online media strategies and provides social media services and strategies to organisations. It started with assisting small business owners in his community, who didn’t have the knowledge or time to use social media, to market their products and services online on platforms such as Twitter and Facebook. Digital Factory is expanding fast and currently provides more than 300 jobs to people in 21 countries around the world.

Ross’s message to other aspiring entrepreneurs in Africa is that, no matter your background, it’s never impossible to turn your life around and succeed. He advises them to look to solve a problem and become an expert in the solution.