Many consumer goods companies from across the world are currently figuring out ways on how to crack the African market. However, with the majority of Africans still shopping at small informal outlets, getting your product into the hands of the consumer is not always straightforward. During a recent webcast Graham Marshall, the man responsible for research company Nielsen’s strategy development in Africa, shared some insights into the continent’s retail environment. 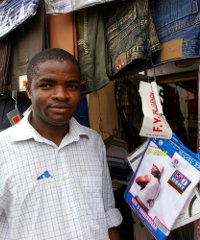 An informal trader in Ilorin, Nigeria.

Dense retail environment In the 19 African countries that Nielsen studied, each retail outlet (formal or informal) is serving an average of only 218 people. This, however, differs from area to area. For example, in Nigeria’s commercial hub Lagos, one store serves around 49 people, while in Tanzania, each trader can cater for 300 customers.

India’s retail environment is even denser than Africa’s, with 147 shoppers served per store. Marshall suggested this might be the reason why many Indian companies are so successful in Africa. “Companies who have had great strategies and success in the marketplace in India, are also working well in Africa. [Mobile operator] Airtel is seen as a great example of how Indian strategies have been moved into Africa … ”

Modern trade is growing Marshall pointed out that modern retailers, such as South African supermarket chain Shoprite as well as US-based Walmart, are actively looking at expanding their outlets across the continent. “While we have seen the modern trade growing from South Africa, we also see pockets of modern trade within markets like east Africa in Kenya where we have a highly formed and a very complex and first-world retailing environment … We are seeing a high level of excitement and a great future for the modern trade within the marketplace,” said Marshall.

The retail environment is constantly evolving Africa’s retail landscape is continuously changing and consumer goods companies need to keep track of these trends in order to ensure their products reach their desired customers.

According to Marshall, change is being driven by macro-economic factors such as population growth, urbanisation and economic growth.

The choice of location for temporary informal stores is often governed by economic activity. “Surveys have shown us that the choice of location for retailers, particularly the temporary stores or table-top stores, is driven by factors such as presence of factories [and] high-volumes of people movements. And with infrastructural improvement, and particularly the Chinese investment, this is always going to evolve,” Marshall noted.

The changes in the retail landscape also differ across the continent. For example, in Uganda both formal and informal stores are currently growing, while in Ghana, the trend is mainly towards larger, fixed outlets.

Different distribution strategies required Marshall said that the strategies to reach end-customers will vary from country to country. For example, in Kenya, most of the temporary informal stores are supplied by a wholesaler. In Nigeria, on the other hand, these traders mostly buy stock from other retailers, not wholesalers.