Ethiopia’s soleRebels footwear company that has received an immense amount of international attention, was recently featured in the December edition of the Chinese Vogue magazine alongside well established brands such as Armani, Chanel, Gucci and Valentino. This comes at a time when soleRebels is positioning itself strategically for expansion across Asia. 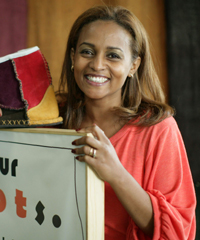 The company, which opened its first Taiwan store in Kaohsiung last month, has just unveiled its second store in the city of Taichung. “The city is incredible, a must go tourism destination in Taiwan,” said Bethlehem Tilahun Alemu, founder and CEO of soleRebels. “The crowds in the area where we are located are fantastic. Additionally Taichung is also a footwear epicentre, home to the Asian design centre for the planet’s largest footwear brand (Nike). It’s probably one of the most visited and watched footwear hubs in Asia.”

Alemu said that the response to both stores has been positive and the environmentally friendly soleRebels brand is regarded highly in the market. “[Taiwan] is one of the top 10 footwear markets in the world,” added Alemu. “Plus it is a gateway market into further Asian expansion including China where we plan to open stores in 2013. We feel very strongly that Taiwan is the perfect place for soleRebels to anchor our Asia wide roll-out.”

SoleRebels, which is the world’s first fair trade certified footwear brand, is also opening its third store in Taiwan this week in Pingtung City. “This opening is even more significant as it puts us well on the way to our goal of 30 soleRebels stores in Taiwan by 2015,” she told How we made it in Africa.

In addition, the company is also expected to soon launch stores in Singapore, India, Malaysia and Indonesia. “We feel strongly that there is immense potential for the brand all over Asia and Southeast Asia and so it’s natural for us to be in these markets,” continued Alemu. “In the United States we will roll out quite a few locations in 2013, beginning with our flagship New York City store.”

Having started in 2005 with just five employees, the company is expanding fast and creating jobs both locally and globally. “We are adding thousands of domestic, full-time, creative and well paid jobs over the next 36 months,” she said. “Through our store openings we will also create 600-800 global jobs by 2016.”

The company is planning on building a new factory in Ethiopia, replacing the current facility. “It allows us to continue to grow community employment to new heights as there will be many new jobs created when this facility is operational,” stressed Alemu.

SoleRebels predicts its global retail roll-out to add over US$15-20 million in revenues by 2015, and by 2020 Alemu aims to have over 150 retail stores worldwide.