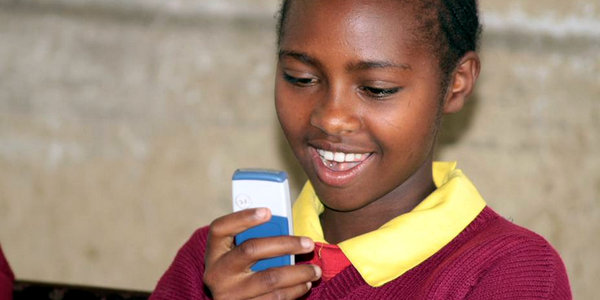 Three years ago American teacher Toni Maraviglia gave up the opportunity to study at the Haas School of Business in Berkley, one of the top such institutions in the world. Instead, she opted to stay in Kenya and founded an education company helping students prepare for exams by quizzing them via SMS on topics learnt in class.

Maraviglia was motivated by her experiences working for an NGO in rural Nyanza on a programme that quadrupled the passing rate of students. So she co-founded Eneza Education (then called M-Prep), which has since expanded beyond quizzing to offer full courses for students – at a small fee. Through Eneza, students and teachers access courses and assessments via basic phones and have the option to interact with live instructors.

The company is nearing the 500,000 user mark across over 8,000 schools in Kenya. It has expanded its user base from primary school students to include those in secondary school, teachers, dropouts and even out-of-school adults.

Users can subscribe to the service for as little as Ksh.10 (US$0.09) weekly. Monthly subscriptions are also available. The learning modules cover every subject in Kenya’s education curriculum. Students also receive a certificate upon completion.

While there is a perception that everything in education is done by government, donor agencies and NGOs, Maraviglia’s company is a for-profit initiative.

“Many people actually think our company is a non-profit because it is in education and I am a woman. But this is legitimate, there is a lot of potential to make money here,” says Maraviglia. “What is really exciting now is that people are finally seeing this as not just an impact market but a real capitalist market – an environment where you can invest and make money. The shift is happening, but slowly.”

Eneza has raised $900,000 from investors and inked partnerships with leading Kenyan mobile network operator Safaricom, the Equity Group Foundation and the US-based IDP Foundation. Eneza recently launched in Tanzania and is expanding into Ghana.

Eneza has its eye on becoming “the go-to education source for young people in Africa”.

“The scale of what we have been able to achieve with very little money is just phenomenal to me,” says Maraviglia.

In a market where most start-ups struggle with scaling, Maraviglia attributes Eneza’s growth to obsessing over her customers, building a strong local team and pivoting to capture emerging opportunities and overcome challenges.

“My team and my customers are more important than anything else. The biggest mistake people make is [focusing] on press, investors, going to conferences and just spending a lot of their time outside work. Our investors are great, but in the end they are not going to make money for us. They will help us make money, but we need to obsess over our customers,” explains Maraviglia.

Every day the Eneza team phones 200 to 300 of its users to get their feedback and experiences.

“[Having] face to face interaction with users [and] calling your users daily is hard. It takes a lot of effort.

“I think the aspects of the business that are hard are the exact things that are going to make you successful,” adds Maraviglia.

Eneza has changed its model along the way to target users that can actually pay for its service. Initially it focused on students at primary school level but this group, aged under 13, rarely have mobile phones. Trying to get schools to pay for their students was also not a highly successful model. So Eneza started offering full courses and expanded its reach to older students who have access to mobile phones.

“Schools are not good early adopters… They can’t just spend money as they want to freely. That is why we are focusing on older people who can actually pay,” says Maraviglia. “Some 30% of my users are not in a formal school setting and most of these people are adults.

“For us that is awesome because that is a bigger market. We have a ton of parents using it to brush up on their educational knowledge.”

But it has been challenging collecting payments, says Maraviglia. Despite the success of mobile money in Kenya, most people, particularly in rural areas, use mobile platforms to send money to each other – not to pay for goods or services.

“It’s not that people aren’t willing to pay, it’s that it’s not easy to pay. If you want to buy Eneza for your kid and you don’t have a credit card, how do you do it? Mobile money is not easy [and] it’s confusing for many people. For a lot of our users when they pay in bulk they pay in cash. You have to have face-to-face interaction to collect from them.”

Eneza handles this by enabling users to pay for its service using airtime. And in some schools it has signed up head teachers who promote Eneza, collect payments from students and other teachers and send the money to the company. The head teachers receive a commission for their services.

Maraviglia advises other entrepreneurs to focus on the customer’s needs, not just on churning out brilliant ideas.

“I see a lot of people bring things into the market that users don’t want. It is not going to magically uptake just because you have a brilliant idea.

“You have got to put your ego aside. Even if you think you have a good idea, if it doesn’t work with the customers then it’s not a good idea. Your customers are not stupid. If they are not paying for your product, you are,” she says.