Charles Robertson, global chief economist at Renaissance Capital, shares his thoughts on Nigeria after a recent visit to the country. 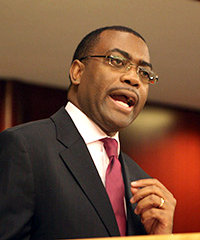 There are some very impressive senior officials running Nigeria, as we saw at the 50th anniversary celebration of capital markets regulation in Abuja on 31 October. As one state governor put it in a memorable speech, there are now five people who should take the credit (or blame) for Nigeria’s successes in the coming years: the finance minister, the governor of the central bank, the trade and industry minister, the head of the Securities and Exchange Commission (SEC) and the agriculture minister. All are very high-quality people, and you will likely know of most of them already, except perhaps the new agriculture minister, Dr. Akin Adesina.

Agriculture in Nigeria represents roughly 40% of GDP, and Adesina, the former vice-president of the Alliance for a Green Revolution in Africa (AGRA), aims to transform this sector. He believes agriculture is not a development issue but a business, and that the government must be taken out of the business, as the government has no role making anything. Nigeria used to be responsible for 27% of global groundnut trade, 47% of palm oil trade and 18% of cocoa trade, but this is now zero for the first two and near zero for cocoa. Today, it imports 500,000 tonnes of brown rice and 2 million tonnes of white rice, but aims to be self-sufficient in each of these by 2013 and 2015, respectively. Adesina took the government out of fertiliser distribution, as corruption made a mockery of its attempts to get fertiliser to poor farmers, and he is now seeking private sector investors that are prepared to invest in irrigation, mechanisation and warehousing to build up the sector. Officially, 40% of Nigeria’s cultivatable land is in use, and the World Bank estimates this has risen to 50%; the potential to double land use and hugely improve productivity is clear.

Three other hugely significant reforms for Nigeria include power sector reform, the Petroleum Industry Bill (PIB) and the removal of the petrol subsidy. If any one of these can be pushed through, we believe the outlook for Nigeria will be much improved. If all three reforms succeed, it wouldn’t surprise us to see global investors falling over themselves to invest in the country.

The most achievable reform in our view is the removal of the petrol subsidy, which is increasingly seen as fostering corruption rather than achieving the goal of helping the poorest in society. This would not require legislative approval, and one non-government official said to us that it could happen by year-end. It was tempting to bet a bottle of wine against this assertion – cynicism over the pace of reform in Nigeria has tended to reap more rewards than optimism, and losing the bet would be a kind gesture, as good bottles of wine are not that easy to find in Nigeria – but, evidently, we could see a positive surprise in this regard.

The only negative we can see from the removal of the petrol subsidy comes from local anecdotal conversations about grassroots opposition to any rise in the retail price of petrol from NGN65/l, to potentially around NGN140/l. The population would need to be convinced that the billions saved would be spent effectively.

Power reform, and infrastructure spending in general, would be the most effective way to redistribute government spending, in our view. The power minister has highlighted that electricity output has risen from 2,500 MW to 4,000 MW over the past year. What investors want to see is the privatisation of generation and distribution companies – expressions of interest are already in. The least amount of optimism surrounds the PIB, with some saying there are now more versions in circulation than there are interested parties, which is a bit unfair, as the latest population estimate for Nigeria implies there are now 168 million interested parties; a figure that also highlights how little oil and gas Nigeria has. On a per capita basis, Nigeria’s oil output is not far off the production of such energy giants as Pakistan and Thailand. Diversification of the economy is essential over the long term.

Protectionism and currency policy both play a role. Nigerian officials have highlighted the success in boosting cement production from 2 million tonnes in 2002 to 11 million tonnes now. Similar plans exist for fertiliser production, and could extend to food processing. Semi-manufactured goods attract a 5% tariff, while completed manufactured goods face a 35% tariff, so fridge-freezers are already being assembled in Nigeria, and we think manufacturing could expand, helped by the demographic surge that is keeping wages low. Our long-term question is whether we should expect a stronger naira (e.g. to NGN120/$1), on the back of foreign capital inflows; a weaker naira, as per the East Asian model; or exchange rate stability. Lamido Sanusi, the governor of the central bank, is clearly aiming for near-term stability.