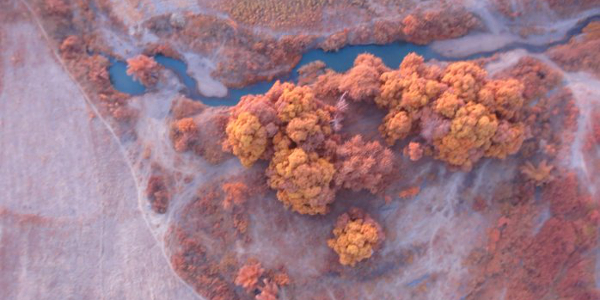 An image taken by a drone over potential farmland in Nigeria.

This year a drone helped design the irrigation system for a 3,000ha rice farm in Nigeria – about 75km from the town New Bussa.

Careful water management is an essential part of cultivating rice as water levels impact weed and nutrient distribution. To ensure that paddy fields are constructed around optimal water levels, land surveyors need to review the land and map out areas suitable for rice farms. Heavy earth-moving and farming machinery are then brought in to level the land (another vital part of rice cultivation) and develop the basins – which can be especially costly in rural areas with poor road infrastructure.

Previous site visits to this particular farm in Nigeria had resulted in the assumption that rice fields should be built as large rectangular basins to optimise water management. But, before the machines were brought in, a drone proved this would in fact result in an expensive mistake.

GMX Consulting is a London-based agriculture advisor, developer and operator focusing specifically on Africa. It brings in Vietnamese expertise to develop and manage agricultural production systems for rice, cassava, tomatoes and fish. The company handles everything from feasibility studies to project design and operation.

The business has also recently launched a drone-based farming application service to help reduce the time and cost of surveying farmland in Africa. Images taken from a drone can help with management decisions around irrigation design. Drones can do in days what manual surveying does in months and are a cheaper alternative to manned aircrafts.

In northern Nigeria, for example, 7,500ha of land had to be surveyed to plot out the terrain for a 3,000ha rice farm. According to Quan Le, managing director of GMX Consulting, it takes two surveyors about three months to map only half of this area. The drone on the other hand can map 1,000ha a day. The reduced time also means reduced costs, as surveyors no longer have to stay in hotels for months on end.

While surveyors are still required to “get a feel of the land”, Le said the drone was able to spot things that traditional surveying missed. Instead of building large rectangular paddy fields in northern Nigeria, the drone’s topography images of an undulating landscape revealed it would be better to build narrow rice fields that followed the terrain and made use of a completely different irrigation system.

“The drone gave us a very good overview of the sloping nature of the soil… So they helped us change our hypothesis. It could have been changed by us continuing with the traditional method of surveying, but that would take much longer to do,” noted Le.

Today about 500ha of rice farmland has been developed and Le expects harvesting to begin within six months.

“That will be exciting… To be able to actually say you are responsible for a few thousand tonnes of rice that will be consumed by the people – it is a special feeling because you know the whole process and how difficult it is to produce food. But hopefully over time – with technology, skills and investment – it will become easier so people will have more food to eat and everyone involved, including our investors, will make money from it. That is the only way it will become sustainable.”