China has overtaken the US and Europe as southern Africa’s biggest trading partner. So keeping tabs on the “do’s and don’ts” of doing business with this Asian superpower has become a must. Glenn Hawes, CEO of IMEXPO, which in May 2011 will see one of the biggest delegations of Chinese investors ever to visit the continent, gave How we made it in Africa a few pointers on doing business with the Chinese. 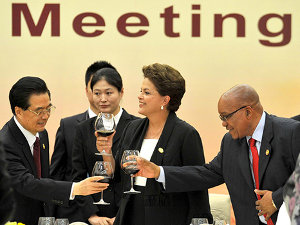 “Getting to know you” is a key part of the Chinese business culture.

Ideally, begin your contact with China through an individual or organisation who can vouch that your company can be relied upon to come up with the goods – and on time.

Outline your company’s history and spell out its products and services, explaining why you believe there is a place for your company’s offerings in the Chinese market.

After the ice is broken and the Chinese get to know you better, a sound platform will have been laid for exploring a business relationship.

The Chinese place great emphasis on personal introductions as a basis of trust. Make your appointments between one-to-two months in advance, preferably in writing.

Be punctual. Arriving late is regarded as an insult.

Nominate the most senior person in your group as your spokesman at these first meetings. These are aimed at determining whether both parties are likely to be comfortable about doing business with one another.

Business cards are exchanged during the first meeting. It is a good idea to have one side of your business card translated into Mandarin – preferably in gold ink.

The colour gold is a symbol of prestige to the Chinese. Hold the card in both hands when offering it, the side printed in Chinese facing the person you are giving it to. Examine any business card you receive before putting it on the table next to you or in a business card holder.

Never stuff the card directly into your pocket or wallet, which is deemed insulting and do not write on someone’s card unless they invite you to do so.

Note: These days business is done in a much more International way and is not so traditional. Translated cards are more applicable to global businesses and those travelling to China. The colour is not so important today as it was previously. Most Chinese business people, specially if they travel and work globally, speak good English and often speak another Western language as well.

Be patient at all meetings with the Chinese. Mobile phones ring incessantly and conversations on them can often be loud and animated. Never ask the Chinese to turn off their mobile phones – this can be seen as bad manners and an impolite intrusion into their way of conducting business.

Bring your own interpreter, especially if you plan to discuss legal or extremely technical concepts.

It’s best to have your senior company spokespeople talking to their Chinese counterparts, with lower rank personnel doing likewise, so acknowledging the importance of rank and hierarchical structure to the Chinese.

Steer away from politics and religion.

Women should be seen in unflamboyant business suits or dresses with a high neckline, as well as flat shoes or shoes with very low heels. Bright colours should be avoided.

Apart from these set piece business formalities, you need to come to grips with the basics of Chinese culture and philosophy and how these can impact on the manner in which you pitch your business proposition.

To the Chinese, “saving face” is sacrosanct. You should not damage the honour, good reputation or respect of any other party or do anything that might cause someone else public embarrassment.

Frowning while someone is speaking is interpreted as a sign of disagreement and this is one of the reasons why most Chinese wear an impassive expression when speaking.

Giving and receiving Chinese Etiquette and Customs gifts is an established Chinese tradition. But they come with certain taboos that you need to be wary of and which should be avoided where possible. For example, do not give scissors, knives or other cutting utensils as they could indicate the severing of the relationship.

Do not wrap gifts in white, blue or black paper, as certain colours have symbolic and sensitive meanings for the Chinese (red is a recommended colour). Four is an unlucky number, while eight is considered the luckiest – so giving eight of something brings luck to the recipient.

If you are stumped for choice of gift, the Chinese love good food and a tasty food basket will make an appealing gift. The best gift of all is to host a banquet in their honour.

A banquet or good restaurant meal is seen as an essential ingredient in the getting-to-know you process.

You should make at least one toast during your meal. Try and clink your glass close to the bottom of theirs as a sign of respect.

At formal meals and banquets, the seating arrangements are overseen by the host. Traditionally, the Chinese regard the right side as the superior and the left side as the inferior seating position.

Guests are generally escorted to their seats, which are in descending order of rank. Senior people generally sit opposite senior people from the other side.

There are many taboos in Chinese dining and banquet etiquette and these vary from region to region within China.

Among the most important to note, don’t eat or drink until the host has delivered the welcoming toast and begins eating. The host is the only person who can signal that the meal has ended – so don’t try to sneak away from a banquet early.

The Chinese know what they want and are willing to compromise. As such, compromise is not considered weak or giving in.

It is rude to interrupt during meetings. Never rebut your counterpart’s ideas or suggestions. Rather respond with “I’ll look into that” or “I’ll see what I can do in this matter.”

Using titles is a sign of respect. Unless you are longtime friends, avoid calling Chinese by their first names.

Allow the Chinese to leave a meeting first.

Speak slowly. The Chinese consider it impolite to ask someone to repeat themselves and Chinese translators may be too shy, or afraid, to ask you to repeat something, for fear they will lose face.

Be tolerant of the Chinese smoking habit. Many Chinese consider smoking, usually among men, the right thing to do in a business environment. If they offer you a cigarette, simply decline and thank them. Don’t lecture or scold them on smoking and health issues.

Talk metric. Supply technical and pricing information in both English and metric units.

Greetings are formal and the oldest person is always greeted first. Address the person by an honorific title and their surname. If they want to move to a first name basis, they will advise you which name to use.

Do not physically touch your Chinese counterparts – not even a pat on the shoulder. Make an effort to avoid talking with your hands, which the Chinese find disconcerting.

For business purposes, it is acceptable to call a Chinese person by their surname, together with a title, such as “Director Wang” or “Chairman Li.” Formality is a sign of respect, and you should clarify how you will address someone very early on in the relationship.

A married Chinese woman usually retains her maiden name. She will use her husband’s last name on occasions for formal addressing only.

In China the most useful form of greeting is a nod or slight bow.

Chinese lower their eyes slightly as a sign of respect. Staring into the eyes of a Chinese might make them uncomfortable. Before your visit, it is a good idea to prepare yourself by studying aspects of Chinese culture, history and geography. When scheduling your appointments, be sensitive to holidays such as the Chinese New Year, which changes yearly, as many businesses will be closed.

In today’s global village, given the availability of the internet and the competitive nature of Chinese businesses, you can freely source business-related information from the internet, trade fairs, catalogues and brochures or advertisements, or approach the Chinese companies directly through a call or email. The Chinese embassy or its representative offices should be able to advise you on the process of setting up contacts with counterparts in China.

Go for it – and enjoy the thrill and the challenge of reaching out to this new business frontier!