A recent article in the Africa Review reports that a Ghanaian startup planning to popularise crowdfunding in Africa has been selected as one of the winners of this year’s Apps4Africa competition. 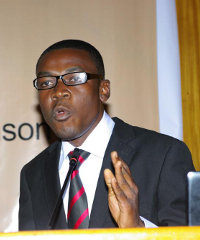 SliceBiz plans to develop a service that will deliver 30-second pitches recorded by entrepreneurs to potential backers over the phone. It says investors will then be able to transfer cash into the projects they like via their mobile phones. The Apps4Africa scheme is funded by the US State Department and the World Bank. It gives awards of US$10,000 to three selected projects with the possibility of top-up funds if the winners meet set targets.

SliceBiz was founded by William Edem Senyo, a Ghana-based businessman who previously worked in banking, and Heather Cochran, a former social worker from California. They aim to shake up Africa’s startup scene by adapting the crowdfunding model that has already proven popular in the West through online services such as Kickstarter, Indiegogo, GoFundMe and others. “Hundreds of startup founders can’t access credit from banks and other financial institutions,” their competition entry explained. “People all over the world with some disposable income are about to see how they can deploy their funds to better use.”

After learning of the win Mr Senyo told the BBC: “Less than three months ago no one would have been able to convince me that I would quit my job, find a great partner, start a possibly disruptive company, and to top that win Apps4Africa. This is a major validation for our business.”

Investors are asked to provide between $250 and $100,000 depending on how much they earn. Smaller sums can be sent via mobile, while larger ones will still rely on more traditional means. Unlike some other crowdfunding services, SliceBiz’s model involves recipients giving up a stake in their business in return for the money received. In addition the Accra-based company will ask for equity in any business that manages to raise capital with its help, and also plans to charge an additional matchmaking fee.

Following the Apps4Africa award Mr Senyo said he now planned a New York launch to further publicise the idea. However, he acknowledged one potential problem – Ghana’s financial regulator has yet to approve his crowdfunding business model.

This is the third year the Apps4Africa competition has been run. It is open to any innovator living and working on the continent. Last year’s event was themed around the idea of software to help farmers and other users tackle issues raised by climate change. In the latest competition organisers asked applicants for software-based solutions to support entrepreneurs wanting to make the most of business opportunities.

“This year’s event has been focused on economic opportunity through the expansion and acceleration of the technology sector,” said Bahiyah Yasmeen Robinson, the competition’s manager. “We now want to scale the ideas past the competition to provide additional mentorship and training as well as financial resources to let the winners become successful.”

With access to capital being one of the challenges most SMEs in sub-Saharan Africa face, we believe crowdfunding services such as SliceBiz have a role to play in helping to tackle this problem. However, it is paramount that this new avenue of capital raising is well regulated to protect all stakeholders from any unscrupulous operators.