Every year thousands of people die in road accidents in Kenya and many more sustain serious injuries. 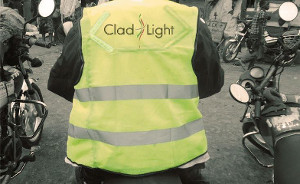 Motorcycles that operate as taxis, commonly referred to as boda-bodas, are one of the leading causes of accidents such that some hospitals have set up special sections reserved for motorcycle accident victims.

In recent years Kenya has witnessed a proliferation of boda-bodas – they come in handy when there is heavy traffic. The boda-boda business has been boosted by cheap motorcycle imports from Japan and China and the abolishment of import tax on motorbikes. In 2010, the World Health Organisation (WHO) estimated there were more than 180,000 motorcycles in Kenya, many of them operating as boda-bodas.

To help prevent accidents among boda-boda drivers, electronics engineer Charles Muchene’s company CladLight has developed an automated safety jacket. The reflective vest, dubbed Smart Jacket, is fitted with lights that are integrated and controlled wirelessly from a motorcycle’s indication system and clearly show the rider’s intent to turn left, right or brake.

“Motorcycles are a major cause of accidents in Kenya,” says Muchene. “When a motorist hits a motorcycle rider they always say they either did not see the rider or they did not know the rider wanted to turn. We did our research and found out that if we increased the visibility of riders there would be fewer accidents.”

A 2013 study, titled Combating road traffic accidents in Kenya: a challenge for an emerging economy, conducted by university professor Charles G. Manyara, indicates boda-boda operators do not comply with safety measures such as wearing helmets and reflective jackets.

“Besides helmets, the use of reflector jackets is the lowest among operators. This situation becomes extremely dangerous at night when boda-boda operators risk being hit by moving vehicles or they themselves knock someone down because they are invisible,” says Manyara in his report.

Stumbling on the idea

Muchene says he stumbled on the idea for the Smart Jacket last year and started developing a power circuit that is fitted on the jacket and the motorcycle.

“I had heard of wearable technology so I started playing around with a home project putting lights on my jacket. I made drafts on paper, bought the components and did the soldering in my room. Afterwards I started thinking of ways to use the technology as a viable business.”

Since February CladLight has been piloting its Smart Jacket with a group of riders.

“We have received feedback from motorcycle riders on the lights, power consumption and the aesthetics of the jacket. We had to change the design and we are now looking at manufacturing in South Africa. We found the circuit was faulty and when it rained one rider said his system short-circuited. We have made amendments to solve the issues that arose during piloting,” explains Muchene.

CladLight plans to start selling the Smart Jacket at the end of September. The jacket will retail at Ksh. 2,500 (US$28). Muchene says a jacket should be good to use for at least two years after which one can replace it.

“One of the riders we piloted with claims he has seen an increase in the number of customers willing to hire him. This is because he gives his clients a Smart Jacket and in some way they feel safer. Honestly the riders don’t really care much, it is the clients who fear motorcycles and constantly worry for their safety. We expect the uptake of the Smart Jacket to be enormous because it will become a competitive advantage for commercial boda-boda operators.”

Muchene explains one of his biggest challenges is access to the finance needed to pay a manufacturing company in South Africa.

“I have to manufacture outside if I want to have an affordable product,” he says. “Even if we wanted to assemble here we would need to have machinery because this is an automated process. Yes we have the skills but the machinery itself would be capital intensive.”

Muchene has patented his circuit with the Kenya Industrial Property Institute and hopes to eventually venture into other markets in Africa.

“I understand the problems in Kenya, which are quote common in most of Africa ranging from extreme weather conditions to roughness of the motorcycle operators. I have taken all those things into consideration and by the time the circuit is industrially made it will fit the Kenyan and African context.”