Loraine Stander looks at common criticisms against group buying websites such as Groupon, and finds out how to make this new form of advertising work for your business.

“The idea of using a daily deals site to turn a quick profit was the biggest misconception in the industry. It has to be looked at as an acquisition tool with a view to retention,” says Daniel Guasco, joint CEO of Groupon South Africa, in a document they released, Does Group Buying Work? 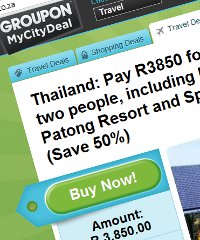 Where some of its competitors, like Dealify.com, failed along the road, Groupon seems to be surviving and doing well. This was confirmed by Guasco in an article on ITWeb earlier this year. Guasco affirmed that Groupon SA was growing and set to expand extensively in 2012.

Despite its popularity, Groupon has come under criticism from frustrated customers reporting poor service and businesses unhappy with their part of the deal.

Groupon provided How we made it in Africa with the results of marketing research undertaken by Ipsos and Nielsen. The results indicate that for example from a merchant’s perspective 80% reported repeat business from the Groupon promotion; 90% of customers spend more than the face value of the coupon and that 90% reported new customers from the promotion. However, the results from the customer’s perspective is contradictive to that from the merchants’ perspective, since only 50% indicated that they will return to the merchant and 40% indicated that they will recommend the merchant.

With a view of achieving both satisfied vendors and customers, Groupon’s document Does Group Buying Work? addresses the following issues:

Some businesses question the cost versus marketing benefit of the group buying model, and whether the large discount placed on group deals makes the substantial marketing that is provided irrelevant.

Kate Jansen, Groupon marketing manager, told How we made it in Africa that merchants must approach Groupon as an alternative to traditional advertising. She said Groupon helps businesses to attract new customers in a far more efficient way than traditional advertising. Merchants receive exposure when a glowing feature of the product on offer is sent by Groupon to a large database of subscribers.

A disgruntled business owner responded to a previous How we made it in Africa article about Groupon SA and provided a detailed break-down of payments for Groupon that left him disillusioned. The merchant’s complaint was not directly addressed, but Jansen said that each contract is tailor-made for the vendor. “We work very closely with our merchants and partners on payment terms, which are contractually spelled out in each one of our agreements. We don’t publicly disclose or comment on each individual payment term agreement but what we can tell you is that we aim to deliver high value customer acquisition for our merchants so they can grow their businesses.”

Groupon provides the example of the Italian furniture store Euro Casa. Elitza Giorgio from Euro Casa said that in her opinion, the percentage cut that Groupon gets from a deal was definitely worth the benefits. “We were in the position of having customers more interested in our furniture than our designing, but as soon as we offered the deal, people became more aware and interested. As a result, Euro Casa made more than one million rand from the deal it ran through Groupon.”

According to Guasco, “Smaller businesses especially are apprehensive about the possibility that they might be unable to deal with the scale of new business that group buying provides – considering the often-staggering consumer reach of these companies databases, which may attract more customers than small companies have infrastructure to cope with.”

The service industry is more prone to hiccups with group buying, as often they are not as able to cope with the demand as well as product-based services can, and service suffers as a result.

“It’s up to you as the merchant whether or not you can handle the service … but we try and ensure that what you are offering is suitable to your specific service and abilities,” says Guasco.

The example of Cape Town restaurant Wasabi is given. Roy De Gouveia is thrilled with his restaurant’s participation in the group buying deal. The outcome “paid tremendous dividends”. He emphasises however that planning ahead was essential. “We worked out the capacity that we could handle for a period of time, and created an offering based around that. As a restaurant, especially with new competition opening on such a regular basis, one has to stay ahead of the game or you’ll fall flat. The only way for a restaurant to stay alive is to always look ahead to stay above the rest, and online marketing is how Wasabi achieved that.”

Group buying delivers large numbers of customers to the door, but once they walk through the door the responsibility for customer retention lies with the company offering the deal. If those customers that were brought in by the discount deal are not returning, the vendor must do some scrutinising.

Giorgio from Euro Casa adds “…it’s up to you as the service provider to ensure that you offer a strong product that makes customers return when the discount is no longer the draw-card.”

Cash-strapped customers are looking to buy products that are not full price – they are looking for a deal. Groupon succeeded in filling this demand. They even managed to make coupons “cool”. This coincided with the increase in e-commerce and according to Guasco “the dawning realisation by ‘traditional’ businesses that they need to move into the online sphere to survive. Group buying may offer the most effective alternative with the least compromise towards achieving this end.”

Yet the bottom-line remains that “businesses that treat customers well get repeat customers and to us that is a successful deal”, says Guasco.