Many South African companies, such as supermarket chain Shoprite, have benefited from expanding into previously under-serviced markets in the rest of the continent. 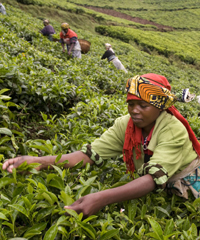 Tea is one of Burundi’s major exports.

While francophone African countries have also seen an increase in investment from foreign corporations, South African companies have been generally slower to grab these market opportunities, compared to those in anglophone Africa.

At the end of last week, the trade and investment promotion agency of South Africa’s Western Cape Province, WESGRO, held the Burundi Business Networking Meeting in Cape Town to promote the business opportunities in Burundi for South African companies. The event was attended by a number of Burundi representatives – including the Burundi Ambassador to South Africa, Isaïe Ntirizoshira, and the mayor of Burundi’s capital Bujumbura, Saidi Juma – as well as a number of SMEs and entrepreneurs from South Africa.

One of the Burundi representatives at the event was economist Gabriel Nahimana. During his speech he highlighted that the Burundian civil war, which lasted from 1993 to 2005, meant that the small East African country fell behind on its economic development and today still suffers from a lack of basic infrastructure. For this reason, it can be a challenging business environment.

However, as highlighted in the World Bank’s Doing Business report 2013, Burundi has been applauded for improving its business climate and was among the world’s most active economies in implementing regulatory reforms between 2011/2012. As a result, the country jumped 10 places in the ease of doing business ranking during that period. The improvements were seen in the areas of starting a business, trading across borders, dealing with construction permits and registering property.

Promoting Burundi as a potential business and trade hub

According to Nahimana, the landlocked country situated next to one of Africa’s Great Lakes – Lake Tanganyika – is looking to gain a reputation with investors as a business and trade hub.

“We are positioning ourselves as a hub, mainly for eastern Africa countries: Tanzania, Kenya, Uganda, Rwanda, and on the western [side of the border] with the Congo,” explained Nahimana. “We are a member of [three] regulatory economic groupings.”

The country forms part of the Economic Community of the Great Lakes Countries – or the Communauté Économique des Pays des Grand Lacs (CEPGL) – which includes Burundi, Rwanda, and the Democratic Republic of the Congo. Burundi is also a member of the Common Market for Eastern and Southern Africa (COMESA) and the East African Community (EAC). Nahimana said that investors should consider Burundi as a transport gateway to these markets.

“We are an open market… Burundi considers itself as a hub point for investors.”

He added that countries like Uganda and the DRC use the Port of Bujumbura to transport their goods using Lake Tanganyika. The lake is divided among Tanzania, DRC, Zambia and Burundi.

In addition, a new investment code was established by the Burundian government to attract investors by protecting the private sector from expropriation, simplifying legislation, and generally making the country more investment friendly for foreigners.

Opportunities for investment and trade

Burundi’s civil war left the country with a number of infrastructure problems, one of the greatest being a lack of electricity.

“If somebody wants to come and set up an electricity plant, he is going to be welcomed,” Nahimana said. “That is a very huge market, and is a market that is investor-ready.”

According to research distributed at the event, “gas, liquid or electricity supply or production meters” is one of South Africa’s top and fastest growing exports to Burundi and saw an estimated growth of 164,117.82% in 2011-2012, highlighting the potential for investment in the energy sector.

The agribusiness potential in the food processing and production industry is another opportunity for investors highlighted by Nahimana. Agriculture accounts for just over 30% of the country’s GDP and employs over 90% of the population. Other than gold, Burundi’s main exports are coffee and tea, which accounts for roughly 90% of foreign exchange earnings, although these exports are a fairly small share of GDP. Motor vehicles for the transport of goods are also one of South Africa’s top exports to Burundi.

The property development sector could also be an area that investors might want to look into and was emphasised by the Burundi Ambassador to South Africa, Isaïe Ntirizoshira. “Emerging from war, no housing projects have been implemented in this last 20 years, so we have a serious problem with housing,” he said.

“In the construction sector, a lot of opportunities [exist], including glass, windows, doors, metal bars, tyres, cement production and so on and so forth,” added Nahimana.

“In the chemical sector, the production of chemicals, including [processing], is a sector where opportunities are very big in Burundi,” continued Nahimana, adding that local pharmaceutical manufacturing could also be big business in the country.