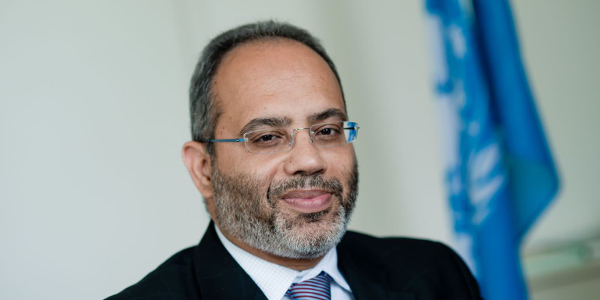 A few weeks ago, on my way from Dire Dawa to the historical city of Harar, in eastern Ethiopia, I came across a minivan that had an intriguing message on the rear window. It read as follows: “If you don’t see my mirrors, I can’t see you.” This funny message put me on a thinking tailspin, as I realised what a wonderful metaphor it was for our continent’s current moment.

Day in, day out, we struggle to contain any bad news that might perturb a new, robust narrative that will reaffirm the new Africa. It is sometimes a thankless task when confronted with the sceptical eyes of so many makers of mainstream public opinion. It is, nevertheless, a task that no Ebola, Boko Haram, bad electoral process or commodity price downfall should discourage us from accomplishing. It has taken too long for African’s to regain a sense of urgency about constructing a common future. This is not new. And it requires renewed agency, as articulated well in the jubilee celebration of Africa’s mother institution, the African Union.

Many still don’t see us because their mirrors are hidden. Africans on the other hand can only move ahead, or overtake my metaphoric minivan, if we make sure that others see and feel what we are up to, and are aware of what we consider to be an imperative.

I believe the construction of Africa’s future will obviously benefit from Africans’ own actions. That by itself does not necessarily mean it would be driven by Africans. The nuanced difference between being “part of” and “being the driver of” the transformation of one’s reality is indeed what matters. After so much suffering and so many missed opportunities, the time has come for Africa to claim its future.

I can see three imperatives that justify a call for action: a historical imperative, a development imperative and a moral imperative.

The roots of contemporary pessimism or scepticism about Africa’s prospects are old. Suffice to say that during the European Renaissance, many authors and thinkers contributed to firming up various papal bulls that gave the right for colonisation to the explorer Kings; all the way to the diminishing portraying of blacks in the works of famous painters such as Pigafetta, Rubens, Velázquez or Rigaud; the depiction of the region in the still-used Mercator scale maps; or the philosophical construct that Egypt was detached from the rest of the continent. Hegel, the German philosopher, captured the essence of the message by proclaiming that Africans had no history before the arrival of the Europeans.

The spread of slavery, the other historical denial, fragmented identities definition with ethnic classification and physical anthropology dealing with diversity as if it was an entomological challenge. These were some of the dire consequences of such contempt.

What followed is familiar. The response too is well celebrated. Africans have shown over the past five decades an agency that has ridden the continent from the shackles of brutal exploitation and discrimination. If in 2013 there was a pause for reflection, it was because too much celebration makes one dizzy. If we grow, have less conflicts, expand democratic processes, increase women’s participation, claim more control over our own resources, we are fine, aren’t we?

No, we are not, and one good demonstration of it is the fact that the pessimistic and sceptical view prevails, outside and in many instances inside Africa. That is the reason we have a historical imperative to change not just our reality but also the perceptions about our reality!

There is an accepted principle that ownership is central to the success of any enterprise undertaken by Homo sapiens. Ownership is essential to overcome the problems of agency in any strategy, programme or project that requires implementation.

If Africa does not take ownership of its own development trajectory, then either others will do so or, worse still, the future of the continent will be left to the vagaries of chance. Africa must avoid the dangers and pitfalls inherent in adopting received paradigms wholesale. It cannot continue to fall prey to different and sometimes ulterior motives of some actors on the international scene.

For Africa to determine its own future, the thinking underpinning its political, economic and social development must come from the continent and its diaspora. Of course, this is a contentious point in the sense that the generation or use of knowledge should not be constrained by geographical or indeed psychological barriers. After all, ownership of ideas is nonsensical. What matters in fact is ownership of a different kind since all ideas, learning and knowledge are welcomed, no matter where they come from.

The experience of structural adjustment programmes in Africa has shown that there are merits in policy flowing from the indigenisation of knowledge. Many induced frameworks displayed great ignorance about the state of African economies and their institutional underpinnings.

What is perhaps of even greater concern is that while African countries were struggling to ‘get prices right’, countries in East Asia were doing the precise opposite and obtaining stellar results in economic transformation. Thus, while the late 1980s and 1990s came to be known as Africa’s lost decades, the East Asian economies were becoming manufacturing powerhouses which created employment and improved social conditions for their people. They also became incredible exporting machines that took great advantage of unilateral trade liberalisation and concomitant de-industrialisation in Africa. In other words, countries that have been successful in terms of development determined their own future.

If Africans do not occupy the policy space vacated in the recent past, thanks to the various crises that shook the pillars of the financial system and facilitated the emergence of new South engines of growth, they may not have another chance. This makes the case for a development imperative.

It is also vital for Africa to determine its own future because of the responsibility that the current generation must have to future generations. If current trends remain the same, Africa is projected to have the most youthful population in the world within 50 years. It would certainly be wrong – given the current opportunities of above average growth – to bequeath the legacy of a laggard continent to future generations. This becomes even more unconscionable if we consider that we are using up the mineral wealth and natural resources of the continent and its oceans, at a very fast rate. As the rest of the world gears up to adapt to mega trends arising from demographic, technological and environmental shifts, it is imperative that our generation should set Africa on a track of sustained and sustainable development.

Ownership and a sense of inter-temporal responsibility are, however, not enough for Africa to determine its own future. Vision is also required. This is quite easily demonstrated from the sphere of private business, where second generations have inherited the family business and run it aground because they lack the vision and entrepreneurship of the founders.

I should make it very clear at this stage that Africa has not lacked visionaries. This continent has also had its share of frameworks which in many ways were attempts to encapsulate a vision for its future, such as the Lagos Plan of Action, the Abuja Treaty and the New Partnership for Africa’s Development (NEPAD). The challenge all along has been that the visions were not accompanied by continental frameworks, but were instead implemented at the national level.

Similarly, as its name implies, a document like the Lagos Plan of Action was not intended as a vision document. Thus, while it contained uplifting language about self-reliance, it was not underpinned by an all-encompassing vision. More critical, however, is that it was not given the opportunity to be implemented due to competing and perhaps more powerful external forces that imposed a different pathway for Africa’s development. That world view saw the African State – and its primary tool of planning – as being at the very root of the economic problems facing the continent. The response therefore was to roll back the State, abandon planning and get prices right!

Is this time around any different?

Following the 2008/2009 financial debacle, it became clear that the response to economic crisis, and indeed to development, had to be more nuanced and diverse. Blueprints with universal ambition died. What the Keynesians and their East Asian adherents had known all along about the positive and mutually reinforcing role of states and markets suddenly became clear to all and sundry. For its part, Africa weathered the storm of the global crisis better than most other regions and the narrative shifted from that of a ‘hopeless continent’ to that of ‘Africa rising’.

This was the background against which the African Union celebrated its 50th anniversary, in 2013. Africa’s leaders felt that it was important to build on current progress while fully cognisant of lessons of the past, and accordingly adopted Agenda 2063 as the long-term vision for continental development.

Given that Agenda 2063 arose from wide-ranging consultations with all sectors of society and relevant stakeholders, it must be seen as an improvement from the past. However, no matter how extensive, consultations do not by themselves lead to high-quality plan documents or even implementation. This is important because as of yet there are no grounds for over-enthusiasm: indeed, average growth of 5% since the beginning of the century has still not translated into decent jobs and the elimination of large pockets of poverty and pervasive inequality.

The negative perceptions about Africa will catch up with the wonderful intentions once again if we do not construct a reality that matches the aspirations of the continent, particularly its too much neglected youth and women. This is the moral imperative.

The important role of infrastructure in supporting structural transformation is quite clear from the physical evidence around us and the plethora of initiatives that have been launched to attract and ensure financing for infrastructure projects, especially power, rail, road and aviation projects. To be viable and indeed useful for structural transformation, these projects must be of a transnational, regional nature. There are two challenges to be overcome in this regard. The first relates to ensuring a harmonised policy and regulatory environment for such investments.  The second challenge pertains to paying for all these projects, while at the same time raising resources for investment in farms and factories and for the delivery of social services. Innovative sources of funding based particularly on the potential for domestic resources are now on the agenda.

The message on the rear window of the minivan was for all those who drive by. In our case our leaders are driving. If they cannot see the mirrors of the minivan the message is that they are not seen either. They can have an accident. They can miss the overtaking. They can keep driving slowly behind the front car. They can fall asleep. They can just accept their bad luck and change their plans and arrive late. Or they can make themselves seen, and more importantly, felt. If the latter happens… it means they have understood Africa’s imperative to determine its own future!