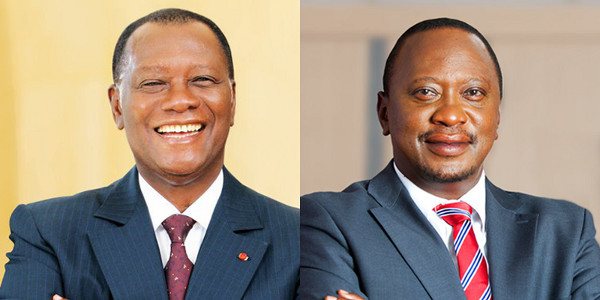 Alassane Ouattara, President of the Republic of Côte d’Ivoire and Uhuru Kenyatta, President of the Republic of Kenya will participate in the fourth edition of the AFRICA CEO FORUM, the foremost international event dedicated to the development of the African private sector, on 21 and 22 March 2016, in Abidjan, Côte d’Ivoire. They will exchange views on the continent’s economy at this fourth edition of the Forum which will host more than 800 participants.

The Ivorian Head of State and his Kenyan counterpart will participate in the AFRICA CEO FORUM 2016 together with an assembly of more than 800 key figures from across the continent and the entire world. The AFRICA CEO FORUM is the foremost international meeting for African leaders and brings together the continent’s top CEOs, bankers, investors and public decision-makers each year.

This upcoming edition marks Uhuru Kenyatta’s first official trip to Côte d’Ivoire. The two presidents will exchange views and discuss different approaches to accelerating structural reforms and improving the business climate, in order to foster a strong African private sector capable of providing a rich source of growth and jobs.

The most dynamic economies of East and West Africa

Having achieved the status of middle-income country last year, Kenya has consolidated its position as East Africa’s economic powerhouse with a GDP of $60 billion and a growth forecast of 6.6% for 2016. Côte d’Ivoire, with economic growth at almost 10% per year since 2012, investment now accounting for more than 20% of GDP and exports constantly on the rise since 2009, is the driving force behind regional integration in the Economic Community of West African States (ECOWAS).

At a time when the continent faces an uncertain economic environment, the participation of the highest representatives of the most dynamic economies of East and West Africa is a true testament to the success of the AFRICA CEO FORUM and its objective of fostering the development of the African private sector by promoting dialogue and regional integration between all of the continent’s economic zones, primarily by strengthening ties between French- and English-speaking regions.

About the AFRICA CEO FORUM

Set up in partnership with the African Development Bank, the AFRICA CEO FORUM is an event organised jointly by Groupe Jeune Afrique, publisher of Jeune Afrique and The Africa Report, and Rainbow Unlimited, a Swiss company specialising in economic promotion events.

In 2015 the third edition played host to more than 800 African and international figures, including 500 CEOs from 43 African countries and 100 top-level speakers. The AFRICA CEO FORUM is firmly established as the foremost event on development issues in the African private sector.