Kenya’s restaurant industry has been booming over the last few years. Local brands are opening outlets in major cities to meet growing demand from the middle class, while international players have also entered the market. Investors too, seem to be taking note. Last year, private equity firm Emerging Capital Partners (ECP), bought a majority stake in a homegrown coffee chain. This interest among investors and entrepreneurs is expected to continue. 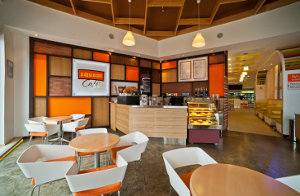 The inside of a Big Square outlet.

“The middle class is growing and we need to invest in companies that service that middle class. I think the excitement in our industry will only grow,” said Morne Deetlefs, the owner of casual dining restaurant Big Square.

We are seated at a construction site where the South African entrepreneur is overseeing the building of his second restaurant in Gigiri, in the heart of Nairobi’s diplomatic zone.

The first Big Square outlet located in Karen, an upmarket area in Nairobi, has already carved a niche for itself barely a year since it opened. By the end of 2013, Deetlefs plans on opening a third Big Square outlet in another prime area, called Lavington. Next year, he hopes to expand to the middle income suburbs in Nairobi.

“I definitely don’t want to be a brand that is exclusive. When creating a brand, you need to choose your best locations first. Once you are known, you can now start venturing into other areas,” he said.

Deetlefs, who was previously managing director at a firm that runs fast food, bakery and convenience retail outlets in Kenya, said he started Big Square to fill a gap in the market.

“I saw an opportunity… The timing is right. I think in the next five to eight years, the whole of East Africa will be a different place… look at the development going on and the growing middle class,” said Deetlefs.

Deetlefs reckoned that there “is scope for national growth”, citing the emergence of business hubs in major urban centres across Kenya.

“Next year we want to be in ten locations,” said Deetlefs. “It is achievable. I am optimistic about the market. Look at what is happening at other players in the industry. They are all growing.”

According to Deetlefs, investors have realised that the restaurant business could be profitable and are willing to finance innovative businesses that meet market demand.

Despite the increasing number of restaurants and coffee houses in major urban centres in Kenya, Deetlefs believes the market is big enough and there is space for brands that differentiate themselves from the rest.