As Nigeria readies itself to host the World Economic Forum on Africa this week, professional services firm EY has come out with a report highlighting foreign direct investment (FDI) trends into the continent’s biggest economy from 2007 to 2013. 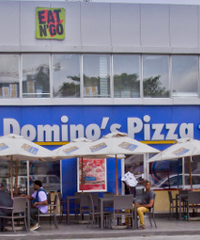 Domino’s Pizza is one of the fast food companies to have invested in Nigeria.

While, as can be expected, 52% of FDI went into the resource sectors (primarily oil), the report highlights an increasingly diversifying economy with industries such as telecoms, real estate, construction, consumer goods and chemicals, accounting for almost half of investment.

“In terms of capital investment, there is still a strong bias towards the oil sector. However, there is a marked shift, with investors from South Africa, the UK, and India, for example, leading the way in investing in sectors like telecommunications, consumer products and automotive,” says EY.

As in many other parts of Africa, Nigeria’s telecoms sector has been one of the star performers in recent years. EY’s report shows that technology, media and telecoms were responsible for 25% of capital invested since 2007. With its massive population, Nigeria is one of the continent’s most potentially lucrative mobile telecoms markets. It is however, a fiercely competitive sector with the main operators – MTN, Airtel, Globacom and Etisalat – all vying for market share.

The retail and consumer products sector also holds exciting possibilities, accounting for 4% of FDI capital between 2007 and 2013. South Africa’s Shoprite has been one of the first entrants in the modern supermarket space. Although the company currently only has seven outlets in Nigeria, its CE Whitey Basson has said he sees potential for over 700 stores. Nigeria has also attracted fast food companies, such as KFC and Domino’s Pizza, and clothing brands including Hugo Boss and Mr Price. Earlier this year, American consumer goods company Procter & Gamble also opened its second manufacturing plant in Nigeria.

Another area with good potential is Nigeria’s power industry. Despite having a population of over 170m, the country only generates about 4,000 MW of energy. EY expects recent progress in the privatisation of the power sector to increase investment into electricity generation and distribution. Multinationals such as General Electric and Siemens are already active in the industry.

According to EY, Nigeria has attracted the most FDI capital in sub-Saharan Africa over the period.

However, despite all the attention Nigeria is receiving from a business perspective, the country still faces significant challenges. Militant group Boko Haram’s prolonged terror campaign has again come under the spotlight in recent weeks after the disappearance of over 100 schoolgirls and two bomb attacks in the capital Abuja, host of the World Economic Forum. While President Goodluck Jonathan has promised thousands of security officials to keep participants at the World Economic Forum safe, there have been reports that some delegates have cancelled their trips due to security fears.

EY’s most recent Africa Attractiveness Survey found a perception gap between companies already doing business on the continent and those with no business presence. Respondents with an established footprint in Africa are positive about the continent’s prospects, while those that have not yet invested rank Africa as the world’s least attractive investment destination.

Nigeria epitomises this bi-polar view of Africa. “For many of us already doing business on the continent it is an exciting dynamic, high octane growth market; for some others, often on the outside looking in, it seems chaotic, unstable and uncertain. The reality is obviously less cut and dried than either of these extremes and in many respects depends on the perspective one chooses to adopt,” notes EY.