According to a company press release, the Linkbook’s operating system is geared primarily towards a user-friendly web experience; from email to social networking and browsing, as well as basic Open Office – everything a business entrepreneur, student or first-time PC user could need in a computer. 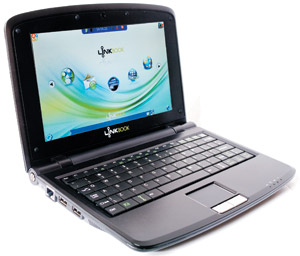 Everything works off the desktop, including shortcuts to popular local online content and e-commerce websites.

“Linkbook is the first handheld computer of its kind available globally and aims to broaden web and computer access in emerging markets, tackling the digital divide and enhancing Vodacom’s strategy to make the internet more accessible to all South Africans,” says Shameel Joosub, managing director of Vodacom South Africa.

“South Africa is a market eager for more ways to get online. We expect that Linkbook will be particularly successful locally due to low PC penetration and we hope that by introducing a low-cost user-friendly internet-focused computer bundled with 300 MB of data per month, this initiative will help to kick start local economies by encouraging entrepreneurs to create a range of locally-inspired business models and services.”

The Linkbook, which has an embedded SIM card, as well as two USB ports, will be available on a 24-month contract at a subscription fee of R199 (US$26.5) per month, including a monthly 300 MB data bundle, from participating Vodacom outlets, nationwide.

“Linkbook is an idea whose time has come,” says Mark Levy, co-founder of Linkbook. “It’s compact and highly intuitive and will bring easy-to-use wireless internet to millions.

“The cost of the actual computer to the consumer over the two-year contract period comes in at R40 ($5.3) per month. It is a massive step in the direction of the $100 computer.”

“Customised for South Africa, including links to the country’s top online sites, it’s a global first. No other laptop in the world does this, so it’s something we as a country should be extremely proud of. It also runs on a Linux operating system called Ubuntu,” says Levy.